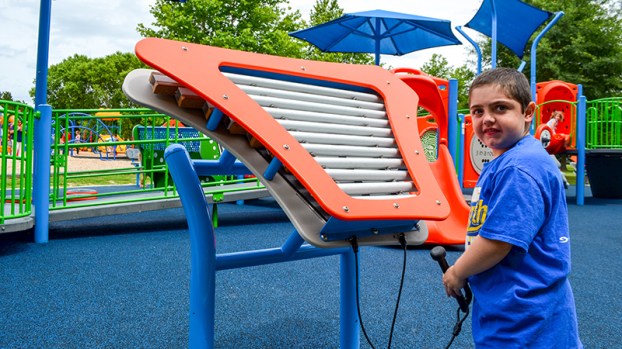 New playground has fun for all abilities

“Mayor, you said you’re excited to cut the ribbon,” Suffolk Parks and Recreation Director Mark Furlo said during his remarks. “Probably not as excited as the children over there, who are waiting anxiously.”

This inclusive playground is located at the Kids Zone Community Playground at Lake Meade Park, 201 Holly Lawn Parkway behind Kroger. The ribbon cutting ceremony was attended by Johnson, members of City Council and other organizations that assisted in this project.

Johnson said the new playground is a wonderful complement to the park’s pre-existing playground, as well as the nature trail, skate park, dog park, tennis courts and other features. This addition will allow children of all abilities to be included in the fun, because “all should play together,” Johnson said.

“This new play environment is designed to serve the physical, social, sensory, cognitive and emotional needs of children of all abilities in our community,” Johnson said in her remarks. “Most importantly, it provides an opportunity for social interaction and the development of understanding, acceptance and the building of common ground between children with disabilities and those without.”

The playground was partially funded through Obici Healthcare Foundation grants and a partnership between GameTime, GameTime’s parent company PlayCore and the Virginia Recreation Parks Society, according to the press release.

Inclusive play incorporates universal design features so that children with different abilities can interact and play together.

According to Gregg Dollings, sales associate for GameTime representative Cunningham Recreation, the pour-in-place rubber surface of the playground reduces the risk of head injuries. Ramps are wide enough for wheelchair access, and the spinning Merry-Go-All is designed to make it easier for children to get from their wheelchairs into the merry-go-round seats.

There are also GameTime’s “Expression Swings,” which allows for face-to-face interaction between an adult and child mid-swing. Children on Wednesday enjoyed being able to share the equipment together as they swung back and forth.

“Research tells us when a parent and a child’s eyes meet, particularly during play, there is an intense and significant moment of emotional bonding that occurs,” according to gametime.com. “Scientists call this ‘attunement’ and it enhances the social, emotional and cognitive well-being of both children and adults.”

Logan Morean enjoyed the playground’s opening day with his parents Amanda and Steven Morean. Logan is diagnosed with Duchenne Muscular Dystrophy, a rare disorder of progressive weakness that affects roughly 1 in 3,600 boys in the United States.

He’s an ambassador for the Muscular Dystrophy Association, and on Wednesday he had no trouble swinging, sliding and playing with all of the other kids.

“He still has his differences, but we try to make him feel as normal as possible,” Amanda Morean said.

Another group, the Inclusive Play Project, has plans to build an inclusive, universal playground in North Suffolk.

The group received approval from the Suffolk School Board in October to design, build and donate an inclusive playground at Northern Shores Elementary School.

“The message here today is that Suffolk is a place for everyone,” Johnson said, “and these new playgrounds help us to make that idea more of a reality for all of the children in our community.

“Always remember that kids deserve the right to think — and to know — that they can change the world.”

Friends and families are welcome to join the downtown festivities this Friday night that will kick-start the annual TGIF Summer... read more