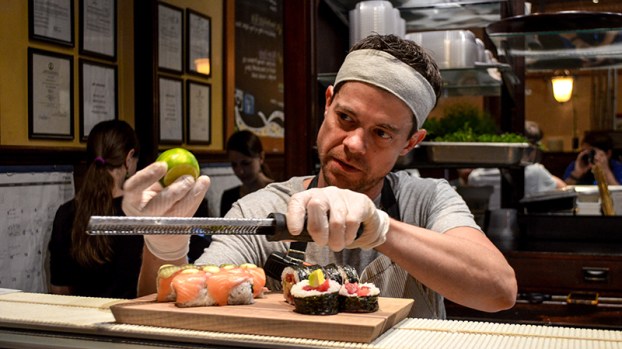 Michael Hart, owner and chef at Sushi Aka in downtown Suffolk, prepares a fresh dish from behind the sushi bar inside the West Washington Street restaurant.

Sushi Aka has refreshingly exotic tastes

Patrons of Japanese cuisine have been going to Sushi Aka in downtown Suffolk for years, except for a brief hiatus when the owner moved north.

Owner and chef Michael Hart brings 20-plus years of restaurant experience to his menu, with an array of influences that make for a variety of dishes and an ever-changing list of food specials.

Some of the more popular, recent additions have been buck-a-shuck oysters, as well as softshell crabs from Johnson and Sons Seafood in Suffolk, Hart said.

But there are always new, exotic fish that show up on the special board inside the West Washington Street restaurant.

“They come for the special fish, and they come for, I think, just a different vibe,” Hart said about his customers.

Hart first opened Sushi Aka just down a block or so down the road from his current West Washington Street location. He operated at that location from 2006 to 2012 before he closed.

Hart then moved north and worked at Morimoto in Philadelphia, Pa., the flagship restaurant for world-renowned Iron Chef Masaharu Morimoto. It was at Morimoto that Hart learned how to prepare octopus, cure fish, in-house smoking and many other skills.

“It was the hardest job I ever had, the most rewarding, the most educational,” Hart said, “and to be working with a staff like we had there … everybody at the sushi bar, and every single person in the kitchen down to the prep cook, could have their own restaurant.

“There was just this intense focus on ‘everything is perfect,’” he continued. “All the T’s are crossed. All the I’s are dotted. It changed me as a chef, I think.”

He said he needed to come back to his regular customers, the best he and his staff have ever served.

“I grew up in Virginia Beach, but Suffolk really took me in,” he said. “The people here, even my servers now who have worked in Norfolk or Chesapeake, they say we’ve got the best customers that they’ve ever served. I knew that I left a bit of a void, so I wanted to come back and be better, basically.”

His time at Morimoto exposed him to a new world of ingredients that helped him improve his craft — especially the fish.

The servers are the guides to that experience inside the warm interior of Sushi Aka, as is Hart himself behind the sushi bar. Patrons can start with hot appetizers like chicken wings that are brined, cooked thoroughly and lightly breaded and tossed with chili honey sauce.

“It’s like a Korean-style fried chicken. They’re really popular, that and probably the rock shrimp tempura on the hot side,” Hart said.

There’s also Hamachi tartare on the cold side, with chive, crispy shallot and quail egg yolk.

“When we present that, they’re told to break the egg yolk (and) mix in the wasabi to how much wasabi you want,” Hart said. “Then you just mix it all together and go to town.”

Hart said that customers are buying more and more into the exotic fish — like the buttery shima aji, or “striped jack” — but local fish like the tuna are always popular.

The crispy rockfish is a big hit, with a spicy chili-peanut sauce — an ode to Suffolk, Hart said — and coconut curry rice.

“The coconut curry rice has got a really nice depth of flavor, and rockfish is a local fish, so that’s probably our biggest kitchen entrée,” Hart said.

He counted the island roll — with a refreshing taste that includes tuna, jalapeno, cilantro, mango and avocado — and the cowboy roll with seared beef, goat cheese, avocado and fried onion as the two most popular rolls, plus their California rolls that have fresh, lump crabmeat.

Most of Hart’s fish comes from True World Foods, and around this time of the year about 80 percent of the produce comes from a local farmer in Suffolk.

This farmer grows exclusively for Sushi Aka, he said, including blueberries, raspberries, blackberries, four different types of peppers, salad greens, cucumbers and much more. Those berries go into many of the restaurant’s desserts and specialty cocktails.

“It’s the first time I’ve been this close to where my food comes from,” said Hart, who does all of the harvesting twice a week.

Hart has also been collaborating with other businesses downtown. Across the street at Uncork’d, customers can have their Sushi Aka orders delivered right to them, and if they buy a wine bottle at Uncork’d then they can have it with their meals at Sushi Aka without a corkage fee.

“Me and Uncork’d have a very good relationship,” he said.

Almost as good as his relationship with his regular customers, along with the traffic that Sushi Aka receives from outside of Suffolk. People come from Virginia Beach, Norfolk and the Peninsula — even Richmond, Hart said.

He credited the steady following to “consistently fresh fish,” a quality that applies to many other facets of the Sushi Aka experience.

“I think most of the people that are talking about us, it’s all about the fish,” he said, “and the fresh flavors — the local stuff separates us from most — and just hard work.”

Sushi Aka is located at 116 W. Washington St. Lunch hours are Wednesday through Friday from 11:30 a.m. to 2 p.m. Dinner hours start at 4 p.m. Tuesday through Saturday, with happy hour from 4 to 6 p.m.