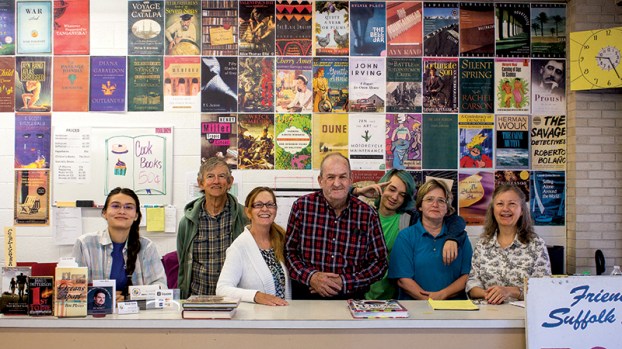 Josie Brackett, Brad Halcums, Debby Bradford, Thomas Baines, Chris Brackett, Janie Brackett and Janet Wray are among the many volunteers for the Friends of the Suffolk Library. (Troy Cooper photo)

One of Suffolk’s best-kept secrets is a small store on Carolina Road that sells a massive collection of cheap books, all donated by local readers and sorted by tenacious Friends of the Suffolk Library volunteers — or “FOSLs,” as they like to call themselves.

Thomas Baines, 76, will reach eight years of FOSL volunteering this October. Baines had spent 33 years as a farmer before retiring, and another 22 or so years working for the city, digging graves at the cemeteries and cutting grass.

His late wife, Delores Mathias Baines, who passed away in 2005 at age 55, was an avid reader. Thomas said she could read an entire book in a single night. He stopped by the shop one day to pick up some more and got interested in volunteering there.
“They said you could come (volunteer) anytime you want,” he said as he sat at a table in the storefront, packed shelves of books and magazines behind him. “I’ve been here ever since.”

Friends of the Suffolk Library was founded in 1981, and ever since the volunteer-driven nonprofit has promoted literacy and supported the library’s reading programs. They helped pay for the software the library used in the Beanstack Winter Reading Challenge in 2018, for example.

For about eight years, their storefront has been at 300 Carolina Road, just at the intersection of Carolina Road and Fayette Street, inside a former paint store near the overpass. It can be easy to miss for passing cars, despite sandwich-board signs placed by the road for their book sales, and a storefront sign that’s about a year old as of April.

Every week these FOSLs sort through hundreds of donated books. Regulars will bring them in bags and boxes filled to the brim, and library staff will pack up all the books donated at their branches and deliver them by the truckload.

FOSL Vice President Janet Wray said that they’ve gotten more attention for their book sales in recent years thanks to social media, newspaper and library advertising — plus word of mouth. But it’s the faithful that have kept them in business for so long.
“I’ve been here for a little over seven years, and we’ll have faithful customers that come in every single month. Some of them have even gone to school with (Thomas Baines),” Wray said.

Readers come to peruse roughly 30,000 books organized on shelves and tables in the front end of the store, along with CDs and DVDs and other donated entertainment. Their items are all on sale for mere dollars and cents.

“They’ve got great books here, and you can get them at a great price,” Baines said.

The trove covers seemingly every genre. Tons of mystery authors like David Baldacci and James Patterson. The works of William Shakespeare and a slew of frightful Stephen King favorites. Puzzles and Harry Potter and other children’s books, many in complete sets and all at a fraction of the cost.

“We have books come in and we don’t know where to put them, because the subject is so obscure,” Wray said as she walked through the stacks that had titles like “The Bathroom Brain Teasers Almanac” and “The Six Husbands Every Wife Should Have.”

These are organized by volunteers every week, including high schoolers in need of community service hours and seasoned book veterans like Baines, who will often come in the mornings with snacks and coffee for the others.

“He is a wonderful, generous person, and he always brings us Dunkin’ Donuts,” said volunteer Debby Bradford, 66.
Bradford just started volunteering at Friends of the Suffolk Library in January. She said Suffolk’s secret book store is a treasure for readers.

“I feel like this place is a real treasure for the citizens in Suffolk, or anyone else in the area,” she said. “It provides the opportunity to get some books for next to nothing, and a lot of people don’t (even) know it’s here.”

Friends of the Suffolk Library is located at 300 Carolina Road. New hardcover books dated 2014 or later are $3 each; new softcovers are $1.50. Hardcovers dated pre-2014 are $1.50 and softcovers are $1. Mass-market paperbacks are 50 cents each. Children’s books are 75 cents per total inch of books purchased.

Their monthly book sale is held on the first Friday and Saturday from 10 a.m. to 4 p.m. The next sales will be on June 7 and 8, then July 5 and 6. Credit cards are also accepted.

Book donations are accepted on Wednesdays from 10 a.m. to noon at the store, or at any library location during their regular business hours.

A new Hope for Suffolk

As Hayden Blythe walks amidst the yarrow, larkspur and other flowers in Hope for Suffolk’s community garden at Westminster Reformed... read more