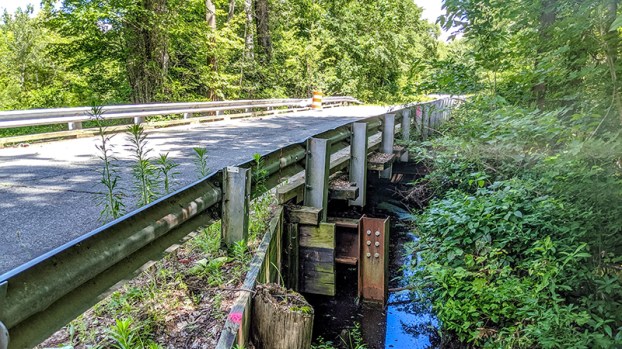 A bridge on Mineral Spring Road is set to be replaced in a six-month project starting this week.

Repairs to the 91-foot Jones Swamp bridge on Mineral Spring Road and the adjacent road are set to begin this week and will close a stretch of road between Holland Corner Road and Arthur Drive for about six months.

The wooden, steel-structure bridge will be replaced with a concrete structure and will be raised slightly. The work will also include elevating a section of Mineral Spring Road. Allan Myers VA Inc. will be performing the work.

Hansen said raising a section of road around the swamp by a couple of inches to a foot would help mitigate, but not eliminate, flooding issues on the road, which arise several times per year. The work, Hansen said, will help improve the drainage of the road, since it’s located in a swamp area.

The bridge, which was built in 1955, has a wooden deck slab and is asphalt covered. It’s about 22 feet wide and is structurally deficient and in poor condition, according to a November 2017 inspection report. It’s something Hansen said the city has known about “for some time.” A bridge that is structurally deficient does not necessarily mean a bridge is unsafe, but rather it’s when the bridge is at a point where it needs either significant maintenance or replacement, Hansen said.

Hansen said this will be the fourth bridge replacement this year in the city. The others were on Badger Road, Southwestern Boulevard and Simons Drive.

“Replacing the bridge makes it a reliable structure and would be able to run our regular traffic,” Hansen said.

The regular traffic would include passenger vehicles, along with fire and rescue vehicles, heavier delivery trucks and septic trucks, but no freight trucks.

The city received $11.6 million as part of the Virginia Department of Transportation’s “State of Good Repair” program that covered 10 city bridges, including the one on Mineral Spring Road and the three already done. The city had to put in $2.6 million of its own money to get the state money.

UPDATE 5 p.m.: All lanes of travel have reopened at this time; however, both westbound lanes will be briefly closed... read more