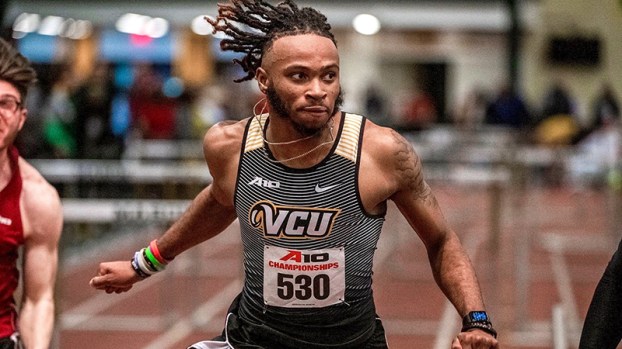 Daiqwuan Faircloth competed in the USA Track and Field U20 championships and placed fourth in the 110 hurdles.(Virginia Commonwealth University photo)

Faircloth competes at USATF U20 meet

Former Team WAR standout Daiqwuan Faircloth competed in the USA Track and Field under 20 meet this weekend in Florida.

The meet consisted of the top talent in the country under the age of 20. Athletes compete in the meet to earn themselves a spot on Team USATF at the Pan America U20 championships in Costa Rica. Other notable Team WAR standouts who have competed in the past include Syaira Richardson and Brandee’ Johnson.

Faircloth showed well in the 110 hurdles and the 400 hurdles.

In his prelims in the 110 hurdles, he ran a time of 13.55, placing him fourth. His time advanced him to the finals. In the finals, he ran a better time with 13.47, finishing fourth in the finals as well.

The 400 didn’t go as well as he would have liked, but overall he felt good about his performance.

“It was a great experience,” he said. “I got the chance to run against some fast people, and the fact that I was right there with them means a lot.”

Faircloth entered the meet with the mindset that he’d make the Pan America team. It didn’t work out how he hoped, but he’s excited about the opportunity to get back to the drawing board.

“I had a goal to make the team, but it just wasn’t in God’s plan for me to do so,” he said. “So, it’s back to the drawing board and just coming back much stronger. I felt great about everything.”

The Suffolk native recently wrapped up a strong freshman year at Virginia Commonwealth University. He was selected to both the indoor and outdoor conference All-Rookie teams. He finished top three in the 110-meter hurdles in the outdoor conference championships. With the start he’s had to his career at VCU, he is excited to learn more and to see what the future has in store for him as a sophomore.

At Nansemond River High School, he was a state champion, national champion and an All-American. Faircloth also earned the 2018 Suffolk News-Herald Male Spring Player of the Year award and was the 2018 Virginia Gatorade Player of the Year.