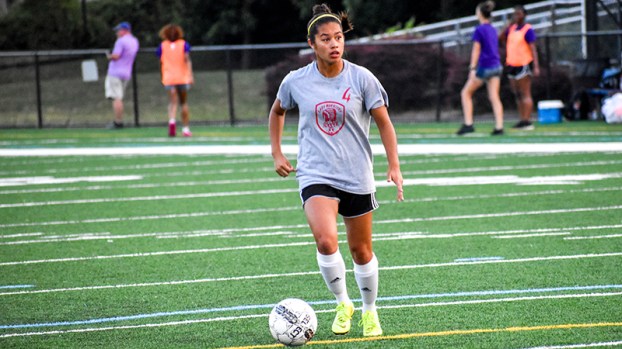 They ended up getting the No. 6 seed in the Class Region A and advanced all the way to the regional championship game, falling to Hickory High School in extra time. They then advanced to the state tournament and fell in extra time in the quarterfinals.

With such a strong season, Nansemond River had two players, Sarah Rhiel and Riley Goss, who were selected to the Class 5 All-State teams. Rhiel was selected first team at midfielder, while Goss was selected second team at defender.

Rhiel had a strong senior campaign, in which she made first team All-District, All-Region and All-State teams. She mentioned that earning All-State was one of her biggest accomplishments. Especially with Nansemond River only playing one game in the state tournament, she’s grateful to have been selected. She didn’t give making the All-State team any thought, because she knew there were a ton of talented players throughout the state.

“I feel amazing about how this senior year went,” Rhiel said. “I felt like my total four years were strong, but this senior year was the best of them all. This team was great, and I wouldn’t have had the success I had without them.”

Rhiel will look to make things happen at the college level as well, as she heads to Christopher Newport University. With the high school career she had, especially her senior season, she feels she will be going into her first collegiate season confident.

“I feel like I’ll go in confident in my abilities with experiences I’ve learned in high school,” she said.

Only a freshman, Goss admitted that it was a shock to hear that she had made the All-State team.

“It was amazing and shocking to me,” Goss said. “But I’m so blessed to have received the selection.”

Goss was among the freshmen standouts on the team that helped Nansemond River go on a strong run on the second half of the season. She admitted not going into the season thinking about the All-State teams but instead wanted to make sure she was doing all she could to help the team win.

“It has definitely boosted my confidence,” Goss said. “I just wanted to help the team have more wins than we have losses.”