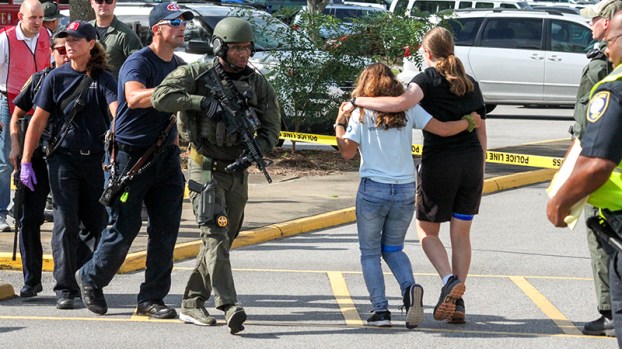 Students portraying victims leave the College and Career Academy at Pruden during a mass shooting exercise on Wednesday morning, as police and rescue workers prepare to enter the building as part of the drill.

Over the shrill sound of the fire alarm, the pops of simulated gunfire could be heard clearly just after a man posing as a gunman entered the front door of the College and Career Academy at Pruden Wednesday morning.

Within minutes, police entered the building looking for the gunman, and first responders followed looking for casualties. Teens playing the role of victims came out, and ambulances and a mass casualty bus set out for area hospitals.

Yes, the simulated active shooter scenario may have been a drill, but in the wake of the active shooter that killed 12 people at the Virginia Beach Municipal Center last month, there was a gravitas to it for the Suffolk and regional first responders taking part.

“The urgency’s always been there for us,” said Suffolk Police Capt. John McCarley. “But we step it up because we want to get the public involved. We can do our best job, we can be there in 20 seconds, but lives will still be lost.”

Suffolk Public Schools public information officer Bethanne Bradshaw said the timing of the drill following the Virginia Beach mass shooting makes school officials think through and focus that much more on the details if such an event should happen.

“It makes it more real,” Bradshaw said. “It shows us what reality could be.”

The scenario simulated an active shooter on a high school campus and has been in the planning process for several months, according to city spokeswoman Diana Klink. The drill was designed to create a learning lab for everyone to carry out response plans, policies and procedures.

“We’re excited to do these kinds of things,” Bradshaw said. “It really teaches us and helps our administrators learn. We had several observers inside from our different schools. … I think it really helps us fine-tune, and see in action, what possibly could be.”

The drill began with the simulation of an active shooter walking into the school concealing a weapon behind him, followed in quick succession by several popping sounds within 10 seconds of his entering the building.

Within five minutes, a handful of Suffolk Police officers made entry into the school as an unmanned drone flew above the parking lot.

Within 10 minutes, about seven people — in this case drama students from Nansemond River High School and other city schools — walked out of the front entrance of the school.

Within 12 minutes, more police had gone into the school, and emergency vehicles — ambulances, fire engines, moved into position in the two rows of cars in the school’s parking lot.

Fire and rescue personnel began to enter the building, but not without police escort in front of and behind them, as is standard protocol, according to Klink.

Within 22 minutes, more simulated victims were coming out of the school — some on their own, others being helped by first responders. Some would be taken to Sentara Obici or Sentara BelleHarbour by ambulance; others would go to Sentara Obici on a mass casualty bus.

Following the event, the first responders will spend additional time evaluating their response.

Bradshaw noted the safety improvements across the school division over the past several years, including safety monitors in all schools, added locked-access doors, more cameras and internal preparations.
“We’ve done a lot of drills at the school level with the police to just continue to learn how to help our best and save the lives of our staff and students,” Bradshaw said.

“We want to know how officers are going to respond in the chaos,” McCarley said. “You have people running at you, grabbing you, giving you information, you hear gunshots, so we want to see where the law enforcement focus is when all of this is going on.”

This drill, he said, wasn’t as heavily focused on the law enforcement side, but when the other one is held later this year, there will be a heavier law enforcement focus to it.

McCarley said the drills have changed over the past several years with the knowledge that comes from each event.

“Our tactics do evolve,” McCarley said. “We learn a little bit with each event. Each event changes, so our tactics have to change with them. We used to wait until we could get enough people to go inside. We no longer wait. So if one officer shows up, one officer’s going in. If 10 officers show up, 10 officers are going in. We no longer wait. We go in and stop the threat immediately.”

McCarley called for the public to get educated about what to do in the event of an active shooter incident.

“Anything the public can do to get engaged and learn what to do in an active shooter event, go on and watch some of the videos like ‘Run, Hide and Fight’ so they have some type of an advantage in these situations,” McCarley said. “‘Cause we’re coming. You can believe we’re coming. It’s just, what can you do until we get there?”

Great turnout for Night Out kickoff

Dozens of community members came to Suffolk City Hall on Tuesday and registered to help throw a “going-away party for... read more