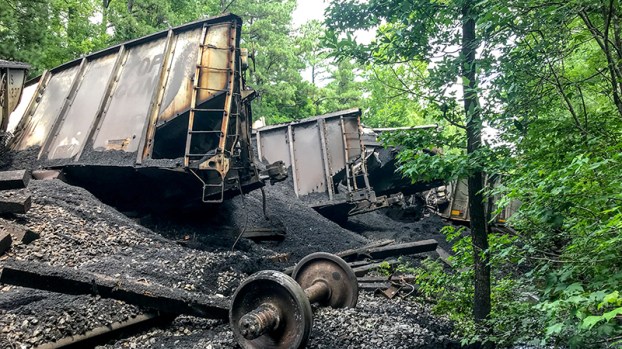 Coal and train car parts were spilled in the Great Dismal Swamp National Wildlife Refuge during a derailment on Tuesday morning. (submitted photo)

Refuge Director Chris Lowie said Wednesday that the derailment happened in Chesapeake, about three-quarters of a mile east of the Suffolk city line.

“It basically accordioned them,” Lowie said. “There’s coal and metal and wheels and all kinds of stuff all over the place.”

Mansfield stated in an email that the derailment happened at 4:20 a.m. Tuesday. “The coal spill is confined to a relatively small area adjacent to (Norfolk Southern’s) tracks, and there is no impact to any major waterway,” she wrote in a Wednesday afternoon email.

“Norfolk Southern operations and environmental personnel are on-site working closely with the U.S. Fish and Wildlife Service, the U.S. Army Corps of Engineers, and the Virginia Department of Environmental Quality to coordinate cleanup efforts and develop an environmental restoration plan,” Mansfield continued.

“The cause of the derailment has not been determined and is under investigation at this time.”

Hundreds of species inhabit the refuge, including endangered ones like the red-cockaded woodpecker, for which a breeding program is under way, and more common animals like whitetail deer and black bear.

Lowie said there is “moderate concern” for the long-term impacts of the spill.

“Coal is not declared a hazardous material according to spill response, but our concern is … the low pH the swamp water has, it can draw those heavy metals out and they get in the surface water or the ground water.

“To what extent it will create a wildlife issue or a water issue, we don’t know until things get sampled and monitored and all that,” Lowie continued.

The good thing is that Lowie believes the ditch near the train tracks is not connected to the greater ditch network on the refuge.

“We feel it will remain fairly isolated. It’s not going to expand a great distance downstream through the ditch network,” he said.

Cleanup of the derailment already is under way.

“We’re working with them to get all the correct policies and procedures and permitting in place to do their work,” Lowie said. “They worked all night and got a lot of the track cleared.”