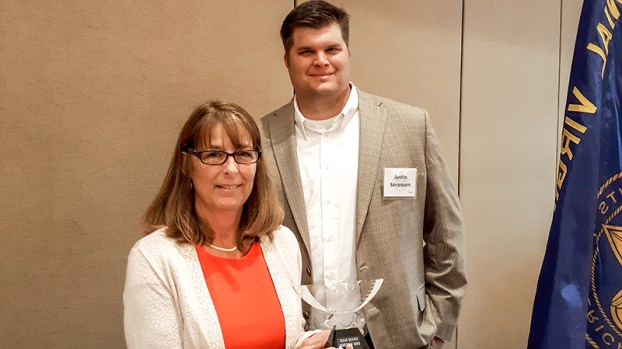 Justin Sorensen presents the Hometown Hero Award to city Commissioner of the Revenue Susan Draper during a May 22 event at the Hilton Garden Inn Suffolk Riverfront.

The event took place May 22 at the annual Hometown Heroes Breakfast at the Hilton Garden Inn Suffolk Riverfront.

Draper has been a “longtime friend of Scouting,” Justin Sorensen, master of ceremonies, said during the event. She’s also living out Scouting values in service to her community with organizations like Suffolk Business Women, the Genieve Shelter and Coalition Against Poverty in Suffolk.

“Susan is a great representative of the spirit of the city of Suffolk,” Sorensen said.

Draper has a bachelor’s degree in business administration from Old Dominion University and earned a Master Commissioner of the Revenue certification from the University of Virginia. She has been the commissioner since Oct. 1, 2014.

“This is really an honor,” Draper said during the event. She grew up as a Girl Scout and recalled being envious of her brother, who was a Boy Scout.

Draper recounted ways groups she is involved with have supported Scouting over the years, including donations the Suffolk Business Women made to Eagle Scout projects at the Nansemond Indian Nation’s Mattanock Town. The group supported the construction of longhouses, a lean-to, a flagpole and more at the historic site.

She also applauded the values of Scouting, which she said are training young people who may not experience these values elsewhere.

“What is Scouting about?” Draper said. “Their goal is to train their youth to be responsible citizens. They instill values such as trustworthiness and character development. They teach their youngest members to be helpful and courteous to all. Not many organizations do this — as a matter of fact, not many households do this.”

Draper said these values are what she looks for when she hires in her office.

“I can train people to do what we do — that’s not a problem,” she said. “But I’m looking for people who have a strong work ethic, who have morals and provide service to others, and above all, I want to hire people with integrity. I think that’s what Scouting is all about.”