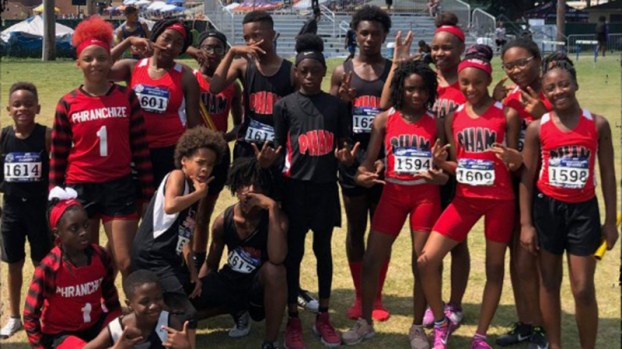 The Phranchize Phamilee track team has found success at recent regional qualifiers and hopes to continue it in the future.(Submitted Photo)

Deja Ward and Lauren McGlone proved they were the top athletes at the 2019 AAU Junior Olympic Games Region 5 National Qualifier held at Armstrong Stadium on the campus of Hampton University June 27-30.

As Lauren McGlone stood on the winners platform, she smiled into the face of her father and coach, Alonzo McGlone Jr. Coach Lowe, as he is called by his team, is president of Phranchize Phamilee AAU track and field team. His vision for the athletic organization is that these athletes would be a family of top performers in their best events with a foreseeable future competing at the college level and beyond.

Phranchize Phamilee, coached by Timothy Cannon (“Coach TJ”), competed in its third Regional Championship. The team, which boasts a roster of 44 athletes that qualified at the district level to compete in the regional meet, had several athletes to compete in more than one event. The young athletes range in age from 6 to 15. Out of the 33 athletes that competed in the Regional event, 17 members of the Phranchize Phamilee qualified for the Junior Olympics that are being held on the campus of North Carolina A&T from July 26 to Aug. 3. Those athletes are:

This promising AAU team will potentially feed athletes to Suffolk Public Schools sports program. Deja Ward is a rising freshman at King’s Fork High School, and Lauryn McGlone is a rising eighth-grader at King’s Fork Middle School. Several other athletes with Phranchize Phamilee Sports Team are the children of educators in Suffolk Public Schools, and their parents greatly support the events and travel with the team.

McGlone attributes the success that the Phranchize Phamilee has experienced this year to the support and connection with the track and field staff at King’s Fork High School led by head coach, Adrian Young.

“Our family is definitely growing, and the success we saw this season shows that we are definitely trending in the right direction,” McGlone said.

The athletic program is only three years old and is showing great promise.

“The athletes bought into the philosophies we inherited, and each week they all saw improvements,” McGlone said. “We are training athletes that are already competing at a high level with athletes in programs that have been around far longer than we have. I will tell anyone who listens, our coaches are definitely getting the assignment right! Phranchize Phamilee Sports Team is already being contacted by families who are interested in joining our PHAMILEE next season.”

For now, the coaches have their sights on the Junior Olympics and seeing more athletes standing on the winners’ platform.

Brown to play in Prospect League