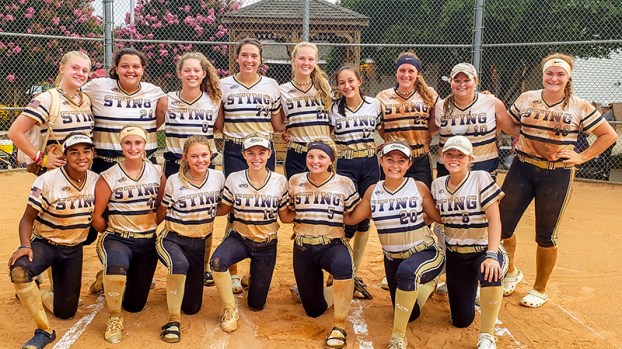 The Suffolk-based 18U Virginia Sting went down to North Carolina to compete in the state tournament. The team lost only one game on its way to second place. It was a strong weekend for the Sting.

What was impressive about Sting’s performance last week was they took a group of younger girls down to play. They have a team of 32 players which is split between two groups. The younger group, made up of seventh-, eighth-, ninth- and tenth-graders, went against 18U teams and competed well. The Sting lost their first game, which put them in the loser’s bracket, but then went on to win the rest of their games throughout the weekend. The weather got in the way of the final game, so at that point, the winner was declared to the team that hadn’t lost, and the Sting were the runner-up.

“After the first game, those young ladies fought their way back,” Coach Scott Haley said. “Mother Nature kicked in, and games weren’t able to be played, but a winner had to be selected, and we came away with second. It takes a special group to be able to play against a lot of these older girls and compete.”

Haley mentioned how the young group they took had to grow up playing against older players, and they did that quickly. The team that won the tournament was mostly made up of players that graduated in 2019. The Sting had players competing that were a part of the 2024 class. As a whole, the coaches and team were excited about the way the girls were able to compete.

“These girls can see what they achieved and be proud of themselves,” Haley said. “This is a group of talented girls and this year, in particular, had some tough competition we were out there playing against.”

The Sting 18U will take a week off before getting back at it, heading back down to North Carolina again to play in another showcase. After that, they’ll head to Myrtle Beach to close out the summer. Sting as a program is excited about the talent they are able to gather from Suffolk and surrounding areas that contributed to the success they are having all along the East Coast.

Richardson competes in NACAC U23 championships