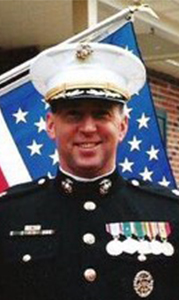 Lt. Col. Robert Lorn Thompson, USMC Ret., 64, died peacefully in his Suffolk home on July 9, 2019. Robert was affectionately known as Bob by his friends and loved ones.

Bob was born on July 30, 1954 in Atlanta, Ga., to Gene and Suzy Thompson. After graduating from Forest Park High School, he went on to obtain his bachelor’s degree from Georgia State University while also serving as a Marine Corps Reservist. He married Melissa Lamb in 1977 in Forest Park, Ga., and in 1978 he graduated from U.S. Marine Corps Officer Candidate School in Quantico. While on active duty, he also obtained a master’s degree in computer science from the Georgia Institute of Technology.

During his 26 years as a proud U.S. Marine, he had the opportunity to serve his country in duty stations in the U.S. and overseas. He served as the commanding officer of the 8th Communications Battalion as part of the II Marine Expeditionary Force headquartered at Marine Corps Base Cape Lejeune, N.C. His career as a U.S. Marine was highlighted by numerous meritorious achievements including the Defense Superior Service Medal, Defense Meritorious Service Medal and the Navy Commendation Medal.

Throughout his life, he was a faithful follower of Jesus Christ, serving as a mentor, teacher and deacon. He was devoted to sharing Christ and authored five books, including “Grace Evangelism” and “A Closer Look” devotional series.

He is survived by his wife, Melissa; daughter, Kelly; sons, Gene and wife Dana and his grandson, Grayson; John and wife Erin; Stephen; sisters, Karen Masters and Sandy Taylor; brother, Tony Mrozinski and wife Kaye; three nieces and five nephews.  He is preceded in death by his parents, Gene and Suzy.

A viewing and visitation will be held at 10 a.m., July 11, 2019, at Liberty Spring Christian Church, 4213 Whaleyville Blvd., Suffolk, VA 23434 followed by the service at 11 a.m. A graveside service will be held at 1 p.m. at Albert G. Horton Jr. Memorial Veterans Cemetery. R.W. Baker & Co. Funeral Home and Crematory, 509 W. Washington St., Suffolk, VA 23434 is serving the family. Condolences may be registered at RWBakerFH.com.