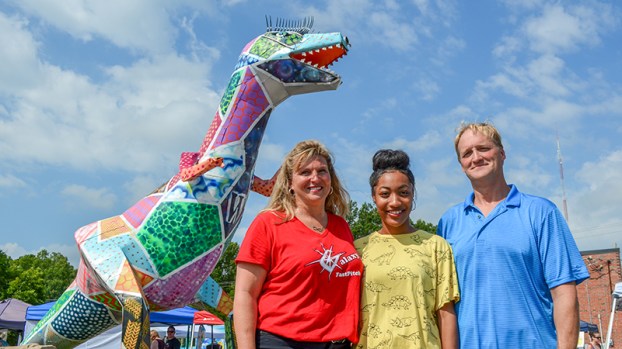 The village of Driver enjoyed the return of its beloved metal dinosaur during the Destination Driver Farmers’ Market on Saturday — now with a new and improved look.

Mabel Dinowright, the village’s iconic dinosaur, received a colorful redesign that caught the eyes of dozens of people at the Saturday morning market. The roughly 10-foot-tall T-rex stood near more than a dozen market vendors in the village.

Visitors stopped for photos and to take a closer look at the bright colors and numerous, eclectic patterns all over Mabel’s hide.

“She’s wonderfully creative,” Janis Greene said about Mabel, after she and her sister, Brenda Oliver, got a picture with the Jurassic sculpture.

“A lot of work went into this,” Oliver added.

Steven Wright, Mabel’s owner, added neon lights to the dinosaur’s spine, outer eyes and eyeballs that shine with different colors at the flip of a switch. This complements Mabel’s pre-existing feature: a small stream of fire that juts out of her nose to entertain crowds during events.

Mabel’s artistic makeover was Naomi Hall’s handiwork. Hall, 21, moved to the area from northern Virginia last winter and is now one of the artists featured at the Simply Vintage store in Driver.

Her Facebook and Instagram handle, Naomi De L’artiste, is written in white font on Mabel’s tail, along with a bold black and white “W” on her chest for the Wright family.

Hall was just driving through Driver one day when she spotted Mabel. The metal sculpture’s brown-reddish paint and white stripes had faded over the years, and Hall thought somebody should repaint the rex.

She and the Wrights agreed for her to paint Mabel about a week before the Fourth of July, she said. She spent three days spray-painting different patterns and colors on Mabel’s hide. She also added crushed glass to the dinosaur’s teeth for some added sparkle.

Hall wanted Mabel’s new look to represent who she is as an artist, while also enhancing Mabel’s role as a welcoming beacon for visitors.

“I want people to be happy when they pass it, so I wanted to make it bright and fun,” she said.

There were plenty of people asking where Mabel was when she was taken down for these renovations, according to Wright. The dinosaur is typically seen across from the Suffolk Seaboard Coastline trailhead in Driver, where she’ll return as an integral part of the Driver community.

Mabel makes appearances for celebrations year-round, including birthdays, graduations and even weddings. She’s part of the opening parade for the Drivers Day festival in the fall. Residents will decorate Mabel with Valentine’s Day cards in February, Easter eggs in the spring and candy canes at Christmas.

“It’s unbelievable how many kids and adults get their pictures taken with her,” Wright said.

The Wright family got the metal dinosaur from the Rio Grande Traders in Driver shortly after the 2008 tornado that tore through the village, Wright said. The dinosaur made its first big impression with the residents in the first Driver Days parade after the storm.

Wright said it just made people happy to see this big, striking metal lizard in the parade. The appeal just grew bigger and bigger after that — and eventually grew into the dinosaur’s big place in the Driver community today.

“We just lit that thing up, and it just made people happy for a short period of time,” Wright said. “It just kind of evolved after that.”

The renovation helped liven up the crowds in the Saturday market. Simply Vintage co-owners Mia Copeland, Cindy Chang and Jennifer Johnson are coordinating the Destination Driver Farmers’ Market, which held its inaugural opening on July 6.

Copeland said that business was “wonderful” on Saturday, with help from the open-air market to catch people’s eyes as they drive by. Mabel’s colorful new appearance also helped with that, she said.

This farmers’ market is a rain-or-shine event that will be held Saturdays through Oct. 5, from 9 a.m. to noon in the parking lot of the Knot Hole Station and Simply Vintage stores in Driver, 3117 Kings Highway. Email Copeland at simplyvintageva@gmail.com for more information.

For more on Driver’s beloved lizard, search for “Mabel Dinowright” on Facebook.