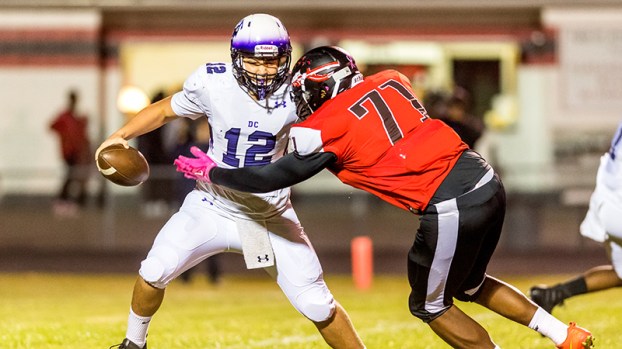 With the 2019-2020 football season a little over a month away Suffolk players have been garnering interest from NCAA football programs and making a name for themselves on the recruiting circuit.

Nansemond River High School senior Rashawn Washington is the latest, as he’s picked up offers and a wealth of interest from other schools, setting him up for a big finale in his senior season.

“There are a lot of schools interested, and I’m just enjoying the process right now,” Washington said. “Just continuing to stay focused and consistent.”

Washington currently has an offer from Morgan State University. He has heard from and visited schools such as Wake Forest and Liberty University. South Carolina and Old Dominion University are also schools that he’s heard from that have a significant interest in him.

Throughout the process so far, Washington has been getting advice from people close to him. Most of all, he wants to stay focused and not get too caught up in the process. He knows the goals that he has set for himself, and in order for him to achieve them, he will need to stay consistent in all the things that he does.

The senior played on both sides of the ball for the Warriors last season. He saw time at defensive end, tackle and tight end. Colleges have looked at him playing both tackle and defensive end. Alternatively, if he drops a little weight, he can also be looked at as a linebacker. Playing on both sides of the ball is tough, and he believes this season, he will be even better at it, doing whatever the team needs him to do.

Washington is hoping to find a school with a good business program. He plans to major in business, and he prioritizes his education, so he wants to make sure wherever he goes has that first. Washington is focused on going into his senior season strong and improving on what he did last season.

In 2018, Washington helped Nansemond River to an 8-4 record. They were the 2018 city champions, and with the bulk of their talent returning, the Warriors should be in for a strong year in 2019. With Washington having a standout season himself, more offers and attention from colleges can come his way soon.

Williams continues to lead by example