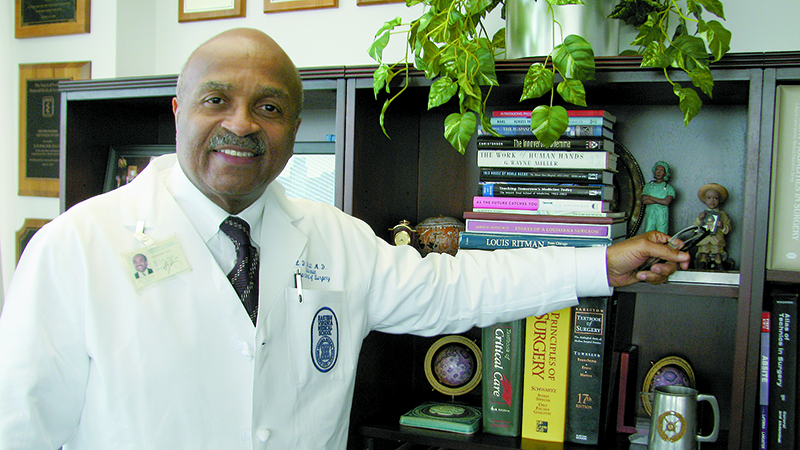 “I’m still stunned,” Britt said on Wednesday after having learned the news Tuesday evening. “While I’ve been honored and recognized all over the world, there’s nothing that can replace being honored by your city.”

Britt graduated as valedictorian from Booker T. Washington High School in Suffolk. He went on to graduate from the University of Virginia, Harvard Medical School and Harvard School of Public Health.

Britt is the Henry Ford Professor and Edward J. Brickhouse Chairman of the Department of Surgery at Eastern Virginia Medical School. He was the first African American in the country to have an endowed chair in surgery. He is board-certified by the American Board of Surgery and the author of more than 300 scientific publications, editor of four books and more. He has held such esteemed positions as president of the American College of Surgeons, chair of the Board of Regents of the American College of Surgeons, president of the American Surgical Association and more. He is a recipient of the nation’s highest teaching award in medicine, the Robert J. Glaser Distinguished Teaching Award, given by the American Association of Medical Colleges in conjunction with the national medical honor society, Alpha Omega Alpha.

Through it all, Britt says, he has never forgotten where he grew up.

He was born and raised in Suffolk and attended the public schools, he noted Wednesday. His mother taught in the segregated Suffolk Public Schools for 49 years and then for four more years after integration.

When Britt first was hired at EVMS, he said, he negotiated that the school would fund him to see patients in Suffolk every Tuesday pro bono, which he still does to this day.

“To their credit, they’ve bankrolled me for over a quarter of a century,” Britt said.

Britt’s work has brought him speaking engagements all over the world, and he always makes his first slide a photo of the railroad tracks in Suffolk.

“It allows me to get grounded,” he said.

Britt said he is honored to be named the First Citizen.

A reception honoring Britt will be held Sept. 26 at the Suffolk Center for Cultural Arts. Proceeds from the event are donated to charitable organizations.

To make a reservation or sponsor the event, contact any Suffolk or North Suffolk Rotarian or visit the Suffolk Rotary Club website at www.suffolkrotary.org.