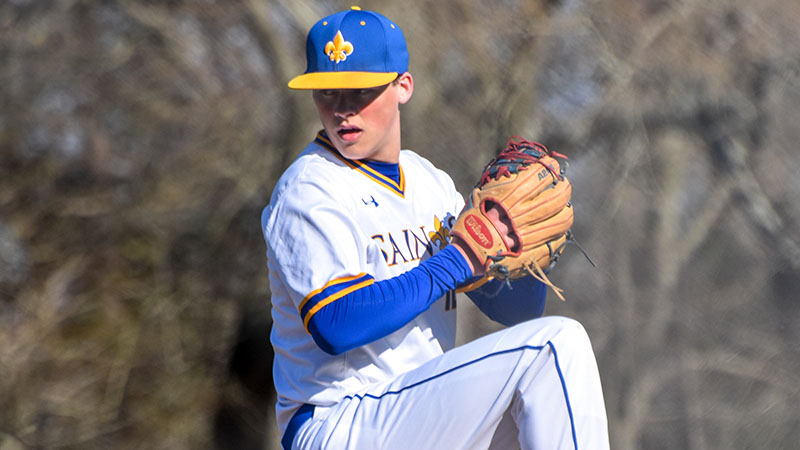 As Turner, heads into his senior campaign for the Saints in a few months, he will do so with his college decision made. Turner received an offer from the NCAA Division III Hampden-Sydney College back in November of 2018, and the coaching staff continued to keep up with him all the way through until now.

“Hampden-Sydney can offer me everything I am looking for on and off the field,” Turner said. “I feel like academically, they’ll guide me to a great future in the medical field.”

Turner will be set to pitch at HSC. For NSA last season, he had a 4-1 record from the mound. There were several schools along the way that reached out to Turner, but the coaching staff at HSC made the decision easy for him.

“Coach (Robbie) Bailey made the decision easier for me,” he said. “It felt like I wasn’t just joining a school but a family.”

Turner had a strong season for the Saints, even though he was unable to play in the playoffs because of an illness. He was a Virginia Independent Schools Athletic Association Division II All-State selection. His four wins from the mound led the team. He had 26 strikeouts in 25 games, which included a no-hitter against Southampton Academy.

“Last season was great, even though it ended kind of short for me,” Turner said. “However, I’m excited about this season. I’m excited to play with a young group of guys and hopefully bring home a state championship.”

Even though Turner has made his decision before the school year starts, he doesn’t believe that will change his outlook on how he plays this year. He doesn’t feel like any stress has been lifted off of his shoulders, and he wants to continue to approach the game the same way.

“I plan on playing with the same intensity I always do,” he said. “I will always give my teammates 100 percent of me when I step on the field with them.”

NSA has two guys on the current HSC roster, Kieran Conway and Colby Owens. Owens is Turner’s best friend, and Turner looks forward to reuniting on the college level after playing at NSA together.

“I started baseball with Colby,” Turner said. “Being able to play from the time we were 6 all the way through college now has been a dream come true.”