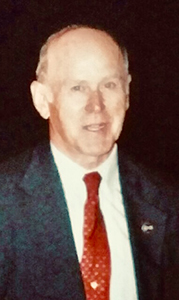 As a fourth-generation, life-long member of Monumental United Methodist Church, Jim was an active participant for more than 70 years in many aspects of service to the church. He particularly enjoyed being involved with United Methodist Men and setting up the nativity display at Christmas.

Jim served his community through his commitment to Holiday House of Portsmouth as past president of the board of directors and organizer of the “Run for Holiday House” (1982-2006). He also shared his time with Oasis Ministry, serving in the community kitchen every month for many years. He was president of the Merrimac Kiwanis Club 1992-93. Jim was a member of Local 539, International Association of Fire Fighters (IAFF) and the Portsmouth Retired Fire and Police Association.

In his last 10 years, he enjoyed his vacation home in Frisco, N.C., in sight of the Cape Hatteras Lighthouse, the ocean and the Pamlico Sound. He walked the beaches with family, surf-fishing occasionally as he had in the glory years of big blues and striper blitzes.

Jim was pre-deceased by his siblings, Evelyn Gugliotta, Irene Kilpatrick and Richard “Bullet” Alexander. He is survived by the love of his life, MaryAnne, formerly a head nurse and director of volunteers at Portsmouth General Hospital. She has been his wife and partner in all things for 69 years. He is also survived by his son, James Jr. (also a fire captain) and wife, Cheryl; daughter, Susan (a retired teacher) and husband, “Biff” Andrews; three grandchildren, Lindsay Richardson (Tim), Rachel Alexander, Jamie Fiegl (Mark); and four great-grandchildren, Colden, Ashlynn, Campbell and Grayson. He is also survived by his goddaughter, Katie Ireland.

Jim embodied his Christian faith and believed with Will Rogers that “a stranger is just a friend you ain’t met yet.” He will be missed by all who knew him.

Services have been entrusted to Sturtevant Funeral Home, 5201 Portsmouth Blvd., Portsmouth. The family will welcome visitors at the funeral home from 4 to 6 p.m. Sunday, Aug. 11. A celebration of Jim’s life will be held at 11 a.m. Monday, Aug. 12. Interment will follow at Olive Branch Cemetery.

The family requests donations to be made to the Monumental United Methodist Fire Restoration Project in Jim’s memory at www.monumentalumc.org or by mail at 450 Dinwiddie St., Portsmouth, VA 23704.