A little taste of Italy 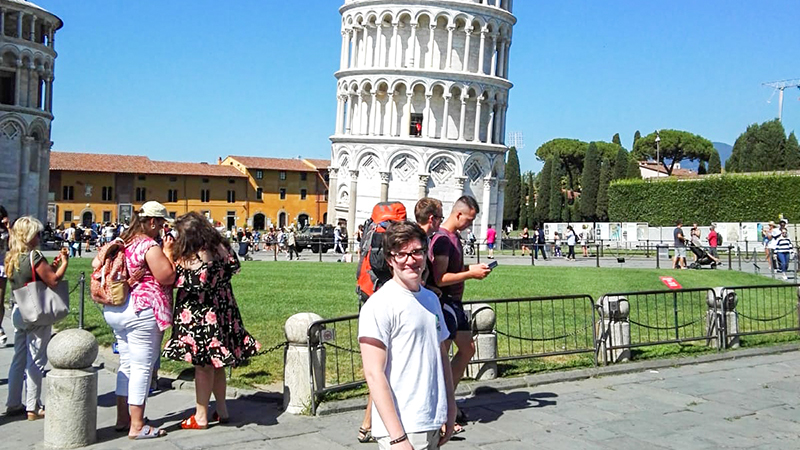 Suffolk’s Rory King, 17, traveled to Italy this summer through Suffolk Sister Cities International. It was an “amazing” experience that showed him the splendor of Italian culture and taught him how to think on his feet in a new place, Rory said.

“It was truly amazing,” he said. “I can’t believe I got to do that for two weeks of my life.”

Sister Cities International was created by President Dwight D. Eisenhower in 1956 to promote respect, understanding and cooperation worldwide. The nonprofit network currently unites tens of thousands of citizen diplomats and volunteers in nearly 500 member communities, with more than 2,000 partnerships in more than 140 countries, according to sistercities.org.

Suffolk Sister Cities began its program in 1981 with Suffolk County, England, and in 1995 added Oderzo, Italy. The Suffolk chapter selected Rory to be this summer’s student ambassador in Italy while three Italian teens visited Suffolk. His family hosted Linda Massariolo, one of those Italian teens.

Rory departed for Italy on June 24 and returned on July 7. He spent his first week in Oderzo with the Cia family and his second week with the Villotta family, both of whom were very welcoming, he said.

He recalled how Ilaria Cia, 15, would insist on paying for meals and have her friends help to show him around Oderzo.

“She was always just really funny and joked around with me a lot,” he said. “Everyone I met was just incredibly friendly.”

Rory’s favorite place in the city was the town square. Grand churches stood on opposites sides of the square, and its clock tower loomed high. In the morning he said there were hundreds of vendors selling clothes, jewelry and other wares, but at night it became a “playground,” with socializing, bike riding and skateboarding.

“It was kind of funny to watch them skateboard on these old, beautiful buildings,” he said.

His travels in Italy took him to the beautiful canals and churches of Venice, the Leaning Tower of Pisa and even more beautiful churches in Tuscany.

“We visited a lot of churches in Tuscany,” he said. “We got this huge private tour of this ginormous church that I was really in love with. It had all this marble and gold plating. It was just beautiful. One sculpture would have 50,000 different meanings inside of it.”

He recalled dinners in Venice, like the one where he enjoyed a pasta and salmon dish with a white wine sauce and a music festival going on all around him and his host family. But the best dinner he had was in a tiny Tuscany city.

“It was lamb chops placed on this cranberry and vegetable mix,” he said. “The lamb was amazing. I don’t think I’ll ever have a better meal for that. I love lamb, but that was just entirely something else.”

Every town had its own story to tell, and Rory did his best to understand everything he saw and heard. Suffolk Sister Cities gave him a crash course on etiquette, cultural differences and key words, but he learned a lot on his own.

“It was really challenging to be in a place where everywhere you were, you didn’t understand what was being said and you had to learn small key words to try and understand and keep up,” he said.

Ultimately, it was an experience that helped him grow in a short period of time.

“It helped me learn to think on my feet more,” he said. “It was like constantly trying to solve Sudoku in your head. You don’t want to be the dumb American that just doesn’t get it. I just tried my best to keep up.”