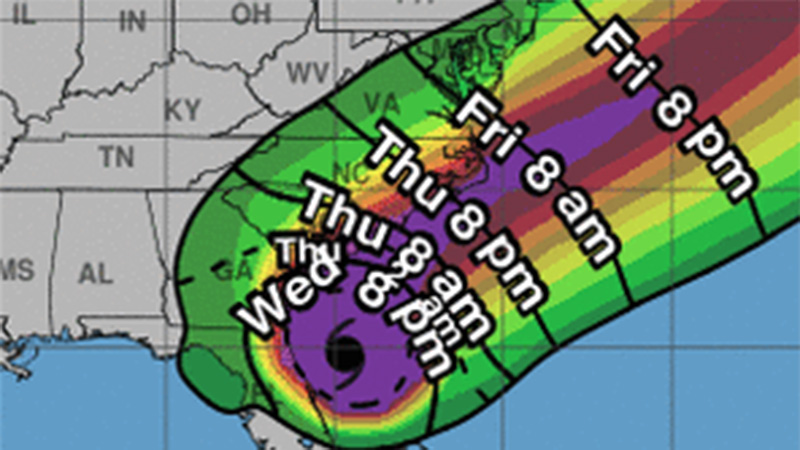 Suffolk is under a storm surge watch.

Suffolk is under both a tropical storm warning and storm surge warning as Hurricane Dorian continues to move up the east coast of the U.S.

According to the 5 p.m. Wednesday update by the National Hurricane Center, Hurricane Dorian is about 150 miles south of Charleston, S.C., moving north-northwest at nearly eight miles per hour with maximum sustained winds of 110 miles per hour.

Dorian is expected to turn north Wednesday night, then toward the northeast Thursday night. A northeastward motion at a faster speed is forecast for Friday.

“Since the (National Hurricane Center) track prediction continues to take Dorian dangerously close to the southeast U.S. coast, all interests from northeast Florida to the Carolinas should remain vigilant to the possibility of experiencing destructive winds, flooding rains, and life-threatening storm surges from this hurricane,” according to the 5 p.m. Wednesday update.

According to Chris Fisher, meteorologist at the National Weather Service Wakefield office, Suffolk residents can expect winds to pick up late-Thursday night, but the main wind increases are expected Friday morning.

“The confidence is increasing in the forecast track,” Fisher said, “but there still may be some small changes in the next 24 to 36 hours.”

No widespread evacuation order is expected for this storm in Coastal Virginia, according to a Suffolk city press release, but citizens and businesses in Suffolk should still expect high winds, heavy rains and potential flooding in low lying areas Thursday night and Friday.

Sentara Healthcare has implemented its hospital and facility-specific emergency management plan in preparation for Hurricane Dorian, according to an email from Public Relations and Communications Advisor Brittany Vajda.

Sentara patients may be discharged from hospitals to keep families together as Dorian approaches and allow them to travel to safer locations. The complete list of facility closings and elective procedure cancelations are online at sentara.com/weather.

“Please stay in touch with your loved one who is hospitalized as the storm approaches,” Vajda wrote. “In addition, physician office appointments, diagnostic tests or other outpatient services may be canceled and need to be rescheduled after the storm.”

The National Weather Service had upgraded the tropical storm watch it had issued on Tuesday for Suffolk to a tropical storm warning. This means that sustained winds of 39 to 71 miles per hour are expected within the next 36 hours.

It says the most likely timing for maximum wind gusts will be Friday morning, with winds of 25 to 35 mph with gusts to 55 mph. The weather service, as of 1 p.m. Wednesday, is calling for  three-to-six inches of rain, with locally higher amounts. Its forecasts said to expect little to no potential impacts from tornadoes.

The National Hurricane Center’s noon update notes that Hurricane Dorian is moving parallel to the northeast coast of Florida and is bringing heavy rain to the southeast U.S. coast.

Virginia’s National Guard plans to mobilize about 30 soldiers for state emergency duty in the Eastern Shore and Hampton Roads areas, according to a news release.

Soldiers will begin preparations today (Wednesday) and will be in place Thursday morning. Their potential missions will include high water transportation using Humvees and light/medium tactical trucks and debris reduction using chainsaws.

Dominion Energy recommends that people have an emergency kit that includes batteries and flashlights, cash, water (1 gallon per person, per day), non-perishable food, a first-aid kit and prescriptions. For those with a generator, it says to fuel it, test it and properly connect it before any severe weather arrives.

Dominion Energy said that if it does see impacts in Virginia, “our crews will be ready to respond as quickly and safety as possible.”

A tropical storm watch continues to be in effect for Suffolk and all of Hampton Roads, and a storm surge watch is also in effect as Hurricane Dorian makes its way up the southeastern U.S. coast.

The National Weather Service in Wakefield says the city is under the storm surge watch, which means there is the potential for two-to-four feet above ground within storm surge areas and peak winds of 25 to 35 mph, with gusts to 50 mph.

The 11 a.m. updtate from the National Hurricane Center stressed the rising possibility of life-threatening storm surge along the coasts of states from Florida to Virginia.

“The risk of dangerous storm surge, wind and rain impacts along portions of the Virginia coast and the southern Chesapeake Bay continues to increase,” the hurricane center’s update stated.

Hurricane Dorian is about 560 miles south-southwest of Norfolk, with peak winds of 105 mph. It is expected to move up the coast today, approaching the North Carolina coast Thursday and Friday, with some uncertainty regarding the exact forecast track.

The temperature at 11 a.m. in Suffolk was 82 degrees with calm winds.

This story will be updated.