The latest on Hurricane Dorian 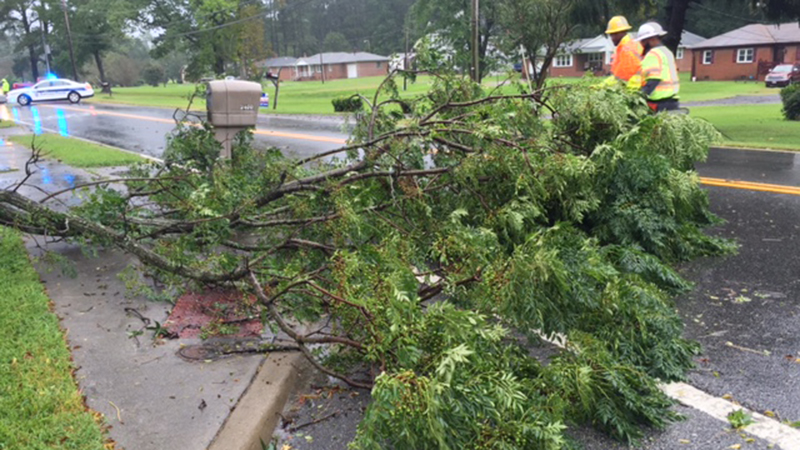 The Hampton Roads Bridge-Tunnel and the Monitor-Merrimac Memorial Bridge-Tunnel will remain open to traffic, and the bridge-tunnels’ standard speed limit of 55 miles per hour has been restored.

Weather conditions are generally improving throughout the region as Hurricane Dorian heads out to sea, according to a VDOT press release.

The Jamestown-Scotland Ferry is operating at reduced capacity, due to tidal conditions, with the Pocahontas in service.

As the tide moves out throughout the region, VDOT is monitoring some reports of minor flooding/ponding on state-maintained roads, including I-264 east at Tidewater Drive (Exit 10) in Norfolk.

Continue to exercise caution when traveling and use 511Virginia.org for the latest road conditions.

UPDATED 3:05 p.m.: The emergency shelter at King’s Fork High School and the Emergency Operations Center at the King’s Fork Public Safety Center (Suffolk Fire & Rescue Station 6) will be closing at 4 p.m. Friday. Each had opened at 5 p.m. Thursday.

A Flash Flood Warning continues, and motorists are again reminded to exercise extreme caution when driving in flood conditions, especially this evening when darkness falls and it may be more difficult to see areas of flooding. Tidal flooding continues at the Kimberly Bridge area on North Main Street, with a full closure anticipated at approximately 5:30 p.m. If you see a flooded road ahead, turn around and find a different route to your destination. Always obey barricades and signs that warn of road flooding. Never go through puddles that are in contact with downed power lines.

There are currently no road closures in city; however, there is a power outage affecting the traffic signal at Suburban Drive and Portsmouth Boulevard.

The 2019 Taste of Suffolk Street Festival scheduled for Saturday will continue as scheduled from 11 a.m. to 5 p.m. The event will feature delicious culinary creations, wine and craft beer, all-day musical entertainment, merchants, a new vehicle exhibition and an array of children’s activities. Situated along North Main Street in the downtown historic district, Taste of Suffolk is free and open to the public. New for 2019 is the Taste of Suffolk “After Party.” Why let the fun stop at 5? The live music will continue in the Courthouse Fountain Park (adjacent to the Godwin Courts Building) until 7:30 p.m. For more details, visit TasteofSuffolkVa.com.

Saturday’s Farmers’ Market at the Suffolk Visitor Center Pavilion is canceled and the special activities scheduled will be postponed until Sept. 21.

Should citizens experience any weather-related concerns, the Suffolk Police Department non-emergency number is 923-2350 (Option 8), and the number for non-emergency roadway-related issues is 514-7600.

UPDATED 2:59 p.m.: The number of Dominion customers out of power in Suffolk has dropped to 108.

Dominion Energy crews and contractors are positioned to move into the hardest hit areas, as weather conditions permit, according to a release from the power company. As of 1:30 p.m., more than 91,000 customers across the service area were without power at more than 800 project locations.

About 7,000 Dominion Energy employees and contract crew members are supporting the restoration effort.

“We know that it is frustrating to be without power and will respond as quickly and safely as possible to outages that occur,” stated a press release from spokesman Jeremy Slayton. “Our goal is to provide customers the best information possible so that they can plan their day-to-day lives. Our ability to get out into the field to restore power will be hampered by weather conditions. We’ll do as much remote healing as possible until field conditions improve enough for our crews to work safely outdoors.”

People should exercise extreme caution around downed power lines and stay at least 30 feet away from any damaged electrical infrastructure, and call immediately to report a downed line at 1-866-366-4357.

UPDATED 1:16 p.m.: A wind gust of 50 miles per hour is the peak gust reported in Suffolk, according to the National Weather Service office in Wakefield.

UPDATED 1:10 p.m.: Suffolk Transit, also referred to by some as VRT, will cease operations effective at 1:30 p.m. Friday for the Pink (North Suffolk connector to Downtown) and Purple (North Suffolk) Routes since Hampton Roads Transit (HRT) canceled their operations today due to Hurricane Dorian. The Pink Route connects with HRT at the Chesapeake Square Mall.

All other Suffolk Transit services will continue as normal Friday and as scheduled for Saturday. For questions, call 214-6442.

VDOT stated the Midtown Tunnel eastbound has been temporarily closed.

UPDATED 11:23 a.m.: About 784 Dominion Energy customers in Suffolk are now without power.

Crews have responded to several locations for downed trees or limbs, including Indian Trail at Ruritan Boulevard, 2400 block of East Washington Street, Route 58 Eastbound just past the weigh scales, 2400 block Copeland Road, 4300 block Sleepy Hole Road, 800 block Longstreet Lane, and 1400 block of Wilroy Road.  The only road closed at this time is the 700 block of Kilby Avenue due to a low power line, and Dominion Power has been notified.

While the Tropical and Storm Surge Warnings remain in effect, a Flash Flood Watch has also been issued.  The Emergency Shelter at King’s Fork High School remains open at this time.

Tidal flooding has been experienced at North Main Street at the Kimberly Bridge and the entire roadway was closed earlier this morning, with the exterior lanes closed and then all lanes reopened. A closure can be expected again during high tide cycles at approximately 5:30 p.m. and during the early morning hours on Saturday.

Motorists are reminded to exercise extreme caution when driving in flood  conditions, including:

The Emergency Operations Call Center can be reached at 514-4570 and will be staffed until advised otherwise for citizens seeking storm-related information for this weather event. The Suffolk Police Department non-emergency number is 923-2350 (Option 8), and the number for non-emergency roadway-related issues is 514-7600.

UPDATED 10:52 a.m.: About 787 Dominion Energy customers in Suffolk are now without power, according to Dominion’s online outage map.

UPDATED 10:51 a.m.: The Virginia Department of Transportation Hampton Roads District remains vigilant as staff continues to monitor the weather impacts for the region, according to a VDOT press release.

Although no major incidents have been reported on state-maintained roads at this time, VDOT crews stand at the ready to respond to any unsafe traveling conditions as a result of Hurricane Dorian — particularly around high tide later this afternoon.

Road-clearing crews and Safety Service Patrols will work around the clock to keep roads as clear and safe as possible, as weather conditions allow.

“Safety of the traveling public and VDOT employees and contractors is VDOT’s top priority,” the release stated. “Motorists are encouraged to limit their travel through the day and to be prepared for changing conditions.”

Road conditions can be monitored in real time through the free VDOT 511 tools, including the 511VA mobile app and www.511Virginia.org site. Residents may report any problems such as flooding, downed trees, or road hazards to VDOT’s Customer Service Center at 1-800-FOR-ROAD (367-7623) or by visiting my.vdot.virginia.gov

UPDATED 10:29 a.m.: City spokeswoman Diana Klink said by email Friday morning that call volumes have been low since the start of Hurricane Dorian’s impact on Suffolk, with no homes reported damaged and no injuries reported.

“We’ve had minimal issues with downed trees/limbs and these have been cleared,” Klink stated.

She said wind and rain were expected to diminish by 4 p.m.

UPDATED 9:58 a.m.: The Virginia Department of Health has closed certain areas to shellfish harvesting thanks to Hurricane Dorian.

The department announced Friday morning that the current approved shellfish harvesting waters in Lynnhaven River in Virginia Beach, the James River downstream of the James River Bridge, and the Back River in Hampton and Poquoson will be closed to shellfish harvesting due to floodwaters caused by tidal flooding and excessive rainfall.  The emergency closure is effective Sept. 7 and is scheduled to be lifted Sept. 28.

Maps of the affected areas are posted on the Division of Shellfish Sanitation’s home page at www.vdh.virginia.gov/Shellfish/.  The affected shellfish are bivalve mollusks including oysters and clams, but not crabs or fin fish.

Heavy rainfall and storm surge from Hurricane Dorian is projected to cause extensive flooding impacting the Hampton Roads region. Due to potential microbiological and chemical pollution hazards, shellfish taken from areas affected by the emergency closure are currently unacceptable for consumption.

Ingesting shellfish taken from the closed areas at this time could cause gastrointestinal illnesses including norovirus, hepatitis A and shigellosis.

For more information on shellfish closures, see the frequently asked questions on shellfish condemnations at www.vdh.virginia.gov/EnvironmentalHealth/Shellfish/faq/.

UPDATED 9:51 a.m.: About 617 people in Suffolk are now out of power due to Hurricane Dorian, according to Dominion Energy’s online outage map.

Earlier: Wind and rain from Hurricane Dorian is starting to pick up in Suffolk as the storm passes over North Carolina’s Outer Banks.

“Right now the center of Dorian is pretty much moving over Cape Hatteras,” said Andrew Zimmerman, a meteorologist with the National Weather Service office in Wakefield. “The rain bands to the north have been pushing onshore, producing some decent rain and gusts generally back into the Suffolk area.”

Dorian made landfall at Cape Hatteras at 8:35 a.m., according to a Facebook post from the National Hurricane Center.

Zimmerman said gusts of 40 to 50 miles per hour have been recorded in Suffolk so far.

“We’re expecting through the day similar wind conditions to persist here over the next several hours as Dorian slowly moves over Cape Hatteras,” he said.

There will be periods of heavy rain this morning, which should begin to taper off this afternoon.

“After that, we’re looking at water levels start to work their way back down,” Zimmerman said.

Dominion Energy reports 420 of its customers in Suffolk are out of power.

In North Carolina and Virginia, more than 7,000 Dominion Energy employees and contract crew members are ready to support the restoration effort, Dominion spokesman Jeremy Slayton stated in a Friday morning email. Customers can report outages by calling 1-866-DOM-HELP (1-866-366-4357) or online using a mobile device at https://www.dominionenergy.com/outage-center/report-and-check-outages.

Virginia State Police is urging residents and visitors to delay driving until after the storm unless absolutely necessary, according to an email from spokeswoman Corinne Geller.

“Virginia State Police aviation, patrol and Search & Recovery personnel remain strategically staged on the Eastern Shore, throughout the Hampton Roads and Middle Peninsula, and the Metro-Richmond region for response to storm-related emergency calls,” she stated. “Drivers are advised to avoid traveling through/to the Hampton Roads, Eastern Shore and Middle Peninsula until the storm has passed.”

Residents should be alert for flood waters from heavy rains, and debris and downed trees caused by the strong wind gusts. For the latest in road conditions, call 511 or go to www.511virginia.org.Virginians are reminded to “Turn Around, Don’t Drown” and that state law requires headlights on when wipers are activated.