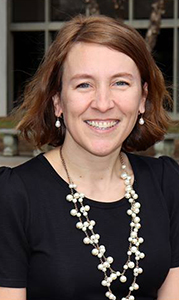 A Smithfield native who started her teaching career in Suffolk has been named the 2020 Virginia Teacher of the Year.

Andrea Johnson, who teaches at Salem High School in the city of Salem in Roanoke County, was named the winner from among the eight regional teachers of the year at Monday’s ceremony at the Virginia Museum of Fine Arts in Richmond.

“My kids think I am a little bit cheesy, because from day one I tell them I love what I do and that I love them,” Johnson stated in a release from Salem City Schools. “It’s right about then that the jaded seniors give me the ‘OK, Crazy Lady’ look.”

She grew up in Smithfield, graduated from the University of Virginia and later earned her master’s degree from Virginia Commonwealth University before going to work for the Virginia Cooperative Extension Agency for several years.

She later left the extension agency, switched careers and began teaching at Lakeland High School in Suffolk in 2011. But her husband was transferred to Virginia Tech to eventually become the state director of 4-H programs, and Suffolk’s loss turned into Salem’s gain. Johnson has taught English at both Andrew Lewis Middle School and Salem High School since she was hired there in 2014.

“I love teaching seniors because they are on the precipice of adulthood and there is this hope and optimism about them because their whole life is in front of them,” she said. “My job is to help them think about who they want to be and how they want to show up in the world.”

Along with her often emotional efforts to cultivate an appreciation for language arts, she also teaches these seniors life skills that they can use before and after graduation, like creating resumes and cover letters and participating in simulated job interviews.

“What I love is that some kids will tell me that they really do not love English, but they love my class,” she said. “I take that as a win because that means even though it isn’t their favorite subject, they realize it is important to read well, write well and communicate well.”

The communication piece of her instruction just might be the most valuable. Johnson understands the isolation that students feel these days due to the number of divided camps caused by social media.

“Occasionally, my students will tell me that it’s not even worth the discussion because no one listens, and that is the saddest part to me as a teacher,” she said in the press release. “The students recognize that the area of civil discourse is a problem, but they do not know how to fix it. I want them to be able to look people in the eyes, say what they think and still be able to disagree in a respectful manner.”

To counter the ill-mannered behaviors and mean-spirited comments that are often part of any teenager’s world, Johnson established the “Acts of Random Kindness” club at the high school earlier this year.

“Our goal is to change the culture by showing kindness, being positive and treating others the way we want to be treated,” she said. “These students care about what type of legacy they will be leaving in the halls and classrooms and they hope the underclassmen will embrace the club and make it grow.”

Johnson will go on to compete for the national teacher of the year honor.