Gordon sworn in as new superintendent 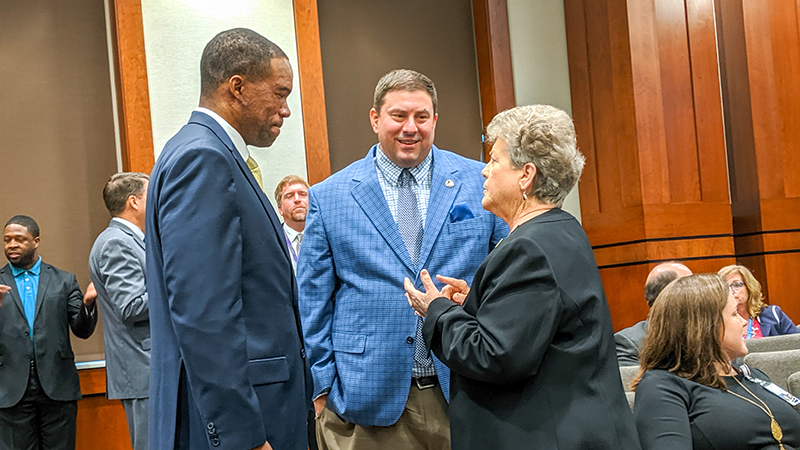 Dr. John B. Gordon III, left, was sworn in as new superintendent of Suffolk Public Schools Thursday at City Hall. With him are state Superintendent of Public Instruction Dr. James Lane and School Board Chairwoman Phyllis Byrum.

In front of city officials and the state superintendent of public instruction, Dr. John B. Gordon III was sworn in Thursday at City Hall as the new Suffolk Public Schools superintendent.

“It seems like it was fate when they came to my session and we talked about culturally responsive instruction,” Gordon said. “And from that day forward, I began to really research Suffolk Public Schools, and I was just so excited to meet all of our great principals and leaders this morning.”

Dr. James Lane, the state superintendent of public instruction, who was superintendent in Chesterfield County when he hired Gordon to be chief of schools, said Gordon was coming to a great place and said “this is the beginning of the next step of great things for Suffolk.”

“I want to congratulate the school board on a great selection,” Lane said. “I’ve known Dr. Gordon for several years, but certainly have worked closely with him for the past couple of years, and you could not get a better educator to lead your schools.”

Gordon cites that experience as critical, and said if not for that, he likely wouldn’t be superintendent in Suffolk. He said he is stepping into a great situation.

“If it really wasn’t for that opportunity, I’m not sure I would be here today,” Gordon said.

He is already reaching out to Lane to position Suffolk for the future.

“James, I’m going to let you know, Suffolk’s going to be a huge partner. Put me on some committees,” Gordon said to laughter, “so we can make sure we can represent this Hampton Roads and Tidewater region well.”

“We look forward to productive times. I know Dr. Gordon, if you haven’t already met him and worked with him, I think you’ll find out that he’s a people-oriented person,” Byrum said.

Besides the principals, Gordon said his aim is to get to know the students and to share his vision for the division. To that end, he will be holding a trio of meet-the-superintendent events at the city’s three high schools — Tuesday at Nansemond River, Oct. 23 at Lakeland and Oct. 28 at King’s Fork — to share that vision and take questions. He plans to be a presence at sports, musical and other afterschool activities. He dropped a hint at what his vision is for the school division.

“The only hint I can drop to you is I think my theme for this year is going to be ‘Building the Best SPS,’” Gordon said in an interview following the ceremony. “And that ties directly into building exceptional schools. … Mrs. Byrum hit the nail on the head. I need to be around the people to really be able to understand that. And so, one of my primary goals is making sure that all of our families, everyone in the city, and most importantly, our kids, know who their superintendent is.”