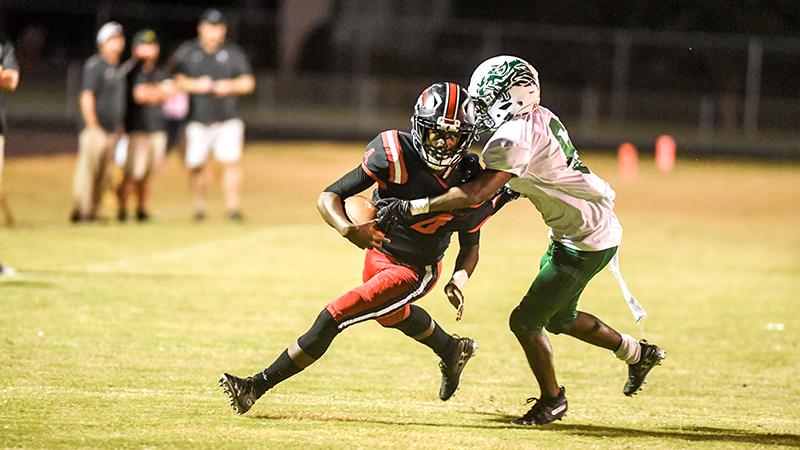 The Bulldogs will have homecoming this weekend, while the Warriors are set for another district clash in Friday night football action.

The Warriors will host the Tigers Friday night in what will likely be the game of the week in South Hampton Roads. Both teams meet with one loss on their record; however, Oscar Smith has yet to lose to a district opponent. It will be a strong test for a Nansemond River team that Coach Justin Conyers believes has a chance to show that they can win the big games.

“We have to prove we can win the big game, and that’s our focus now — trying to get over the hump,” Conyers said. “They are a great, well-coached team, and we are going to have to come out and be ready. We have to go out there and make sure we play mistake-free football.”

The Warriors will head into the game boasting one of the top rushing attacks in the area. X’zavion Evans currently leads the team with 94 carries for 921 yards and 13 touchdowns. Brent Stratton has added 557 rushing yards on 56 carries to go with six touchdowns. Nansemond River believes they can continue to have success against the Tigers defense as well.

“Our rushing attack has been strong against every opponent,” Conyers said. “We feel like we can continue having success with that.”

A win Friday night would do wonders for the Warriors playoffs aspirations as well. They are currently in the top 10 in a tough region but could move higher with a win.

After taking three straight losses to some tough opponents, the Bulldogs are looking to bounce back on homecoming night against Great Bridge. King’s Fork was shut out last week against Oscar Smith, but considering what’s at stake this week for the group, Coach Kermit Buggs believes the team will be fired up and ready to go.

“It’s a homecoming game for us, so the guys are fired up about that,” Buggs said. “This will give us a chance to bounce back.”

The Bulldogs have already gone through the gauntlet of the Southeastern District. They have played against all of the top teams, and now Buggs feels like they have a real chance to string together some more wins as they look to make that playoff push in Class 4 Region A.

The Saints took a loss in their homecoming game last weekend against Norfolk Academy, snapping a two-game winning streak for the Saints, who had seemed like they were putting together some nice momentum in the latter part of the regular season.

They will go on the road and look to get a win against Norfolk Christian.

“We just got back to work and made the corrections we needed to make,” Coach Mike Biehl said. “We knew after last game we could be better, and we are hoping to be that going forward. We are all in this thing together, and that’s the only way we are going to be able to get out of it.”

NSA will be at Norfolk Christian at 7 p.m. Friday.

The Cavs return home in search of their first win of the season as they take on Hickory. Lakeland was shut out for the second time this year when they took on Great Bridge High School last weekend. Hickory only has one win in the district so far, and this could be a good opportunity for Lakeland to grab a much-needed win.

Any win the Cavs achieve helps them in their playoff hopes, with all the schools they face being bigger schools. Lakeland is still hoping to get their offense going before the season ends, and Coach Joe Jones believes they will.