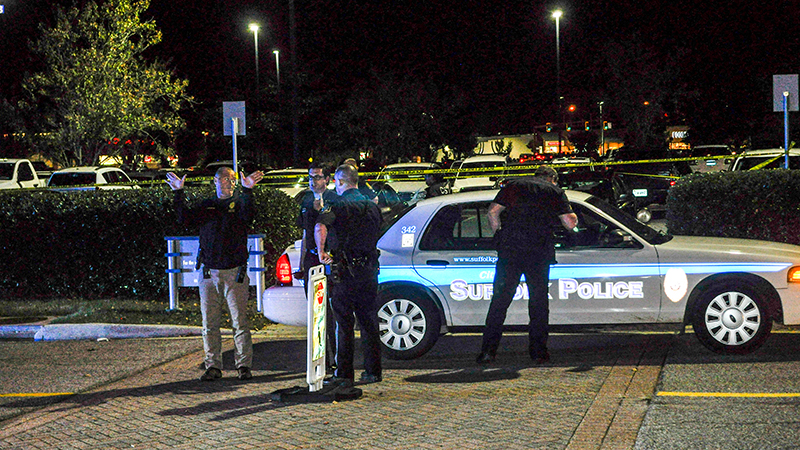 A suspect is in custody following a fatal shooting in the parking lot of Sentara Obici Hospital on Monday evening.

The shooting, reported at 6:29 p.m., was initially reported as an active shooter incident through Sentara’s emergency notification system. As it turned out, there was only one gunshot victim.

The victim, an adult male, was pronounced deceased, according to a city officials. No further information on the victim or suspect was available on Monday night, except city spokeswoman Diana Klink stated that Suffolk Fire & Rescue medics were not involved in the actual shooting, which was an early rumor following the incident.

Medics did, however, spring into action following the shooting, Klink stated.

“At the same time we had crews here from Suffolk Fire & Rescue that were actually transporting another patient,” she said during a 9 p.m. press conference at the hospital. “Thankfully, they were here on the scene and were able to actually get the patient that was actually wounded and bring him inside the emergency room for additional treatment.”

Klink stated she had no further details about the nature of the incident.

Hospital President Coleen Santa Ana said the hospital immediately went on lockdown as soon as they were aware of the situation. That triggered overhead pages within the hospital as well as an emergency notification to all employees.

As part of a “plain language” push, Santa Ana stated during the press conference, “We did announce an active shooter so that folks could take cover right away.”

One woman on the scene following the shooting, who asked that her name not be used, said her daughter is a nurse at the hospital and she drove all the way from Franklin to check on her. She said her daughter called and said there were several nurses hiding in a bathroom.

Santa Ana said people in the waiting room of the emergency department, the closest entrance to the scene, were moved to cover while three staff members helped Suffolk Fire & Rescue get the victim inside and treat him immediately.

“We only lifted lockdown when police felt the situation was safe for the rest of our staff,” Santa Ana stated, adding they were grateful for the Suffolk Police. The department provided an officer until 7 a.m. “even though the suspect is now in custody, just to ensure the family and the patients and our staff continue to feel safe,” she said.

“It’s an emotional situation, especially when you have something so close to the hospital doors,” she said. “I think they reacted very appropriately, and I think that they put the patients first and did everything just like our protocol.”

UPDATE: Man killed by gunfire at apartments off Carolina Road