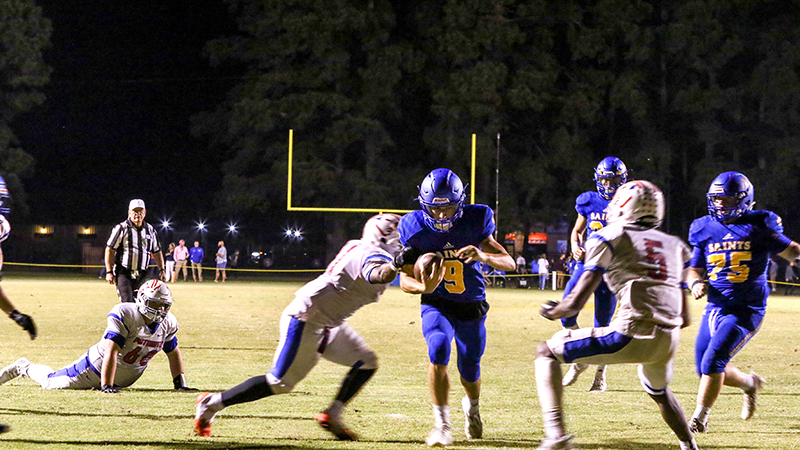 Drew Bergeron was an All-Conference selection at defensive back for Nansemond-Suffolk Academy. (Chris Dailey photo)

The Nansemond-Suffolk Academy football team had eight representatives on the All-Conference teams.

After starting the season slow, the Saints picked things up in the second half of the season to finish 4-6. Throughout the season, the Saints defeated some tough opponents, which included playoff teams. Because of the Saints’ strong efforts, they were represented well on the Tidewater Conference of Independent Schools All-Conference teams.

On offense, the Saints had four selections, with running back George Pettaway leading the way. Griffin Dugan was an All-Conference selection on the offensive line, while Jaden Freeman earned a selection at receiver and Simon Dowd as a specialist.

On the defensive side of the ball, Caleb Evans earned a selection as a defensive lineman with Drew Bergeron getting an All-Conference nod at defensive back. Adam Soper and Kemauri Spencer were both selected All-Conference at linebacker, while Bergeron was also selected on the second team as a specialist.

The Saints dealt with some injuries throughout the season, but when healthy, they showed themselves to be the team they were during the 2018 season. NSA was in the playoff hunt until the final two games of the season, but couldn’t quite get the wins they needed to get in. Many players who came out for their first year of football earned All-Conference honors.

Coach Mike Biehl gave credit to his team all year long for being resilient whether it won or lost. Because the Saints never got down on themselves, they were able to pick up some quality wins this season, meaning the Saints will likely have some All-State representatives as well.