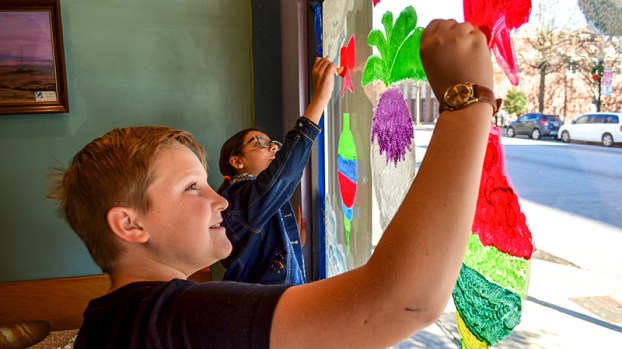 Talented art students from Suffolk Public Schools are decorating windows in downtown Suffolk this week to enrich the streets with holiday cheer.

With a theme of “Home for the Holidays,” 80 talented artists from elementary through high school grade levels are using their skills to decorate storefronts on Tuesday and Thursday, according to a city press release.

Approximately 40 elementary schoolers were hard at work on Tuesday morning and were then treated to a luncheon at City Hall. Middle and high school students will bring their paint brushes downtown this Thursday, then enjoy a Subway lunch, according to the press release.

Their designs will be finished in time for the Suffolk Holiday Parade downtown on Dec. 14.

“The purpose of this event is twofold,” said Lesa McNamara with Suffolk Public Schools. “It’s community engagement, the downtown businesses really enjoy having the kids and letting the kids showcase their art, and the children themselves get to share their art with the community, so they really look forward to coming and showing their talents in time for the Christmas parade.”

This is the 19th year the city of Suffolk has partnered with Suffolk Public Schools to “Paint the Town for the Holidays,” according to city spokeswoman Diana Klink.

“This brings such a festive touch to downtown not only for the participating businesses, but also for shoppers and employees,” Klink wrote in an email. “It’s always exciting to see the amazing artwork these gifted and talented students come up with in keeping with the Holiday Parade theme, which is “Home for the Holidays” this year.

“There’s nothing like seeing the proud faces of these students when they’ve completed their masterpieces, and we invite everyone to come downtown to help share in the magic they’ve created.”

“I think it’s really important that we give the kids a chance to express themselves and show their creativity,” Gordon said, “and it also shows a level of responsibility when they’re able to leave on a field trip like this, partner with the community, show the collaboration that we have with the school division, but to also really give them the opportunity to just be happy about this time of year.”

The businesses and other establishments that are offering their windows as canvases this year include SunTrust, BB&T, Wells Fargo Bank, Subway, The Plaid Turnip, Bank of America, Baron’s Pub, Brighter Day Café, The Suffolk Peanut Center (Planters Store), One Past 7 (Artist’s Loft), School Administration Offices, and the Suffolk News-Herald.

The kids wore their aprons as they colored their designs. The smell of paint was thick, and there was crumbled newspaper on the floor, splattered with a variety of bright colors.

For their artwork, the Kilby Shores artists chose to do Christmas elves. Salerno explained that they have their own Christmas elf that visits their art room in December to cause mischief.

“We have an elf that visits our classroom, so we all did elves this year, because elves are popular now — little mischievous elves that show up in people’s houses,” Salerno said. Her students went back and forth on what to name their classroom elf, and debated over names such as Elfy, Nutmeg and Gerald.

On North Main Street, eight Mack Benn Jr. Elementary School fourth- and fifth-graders decorated the windows of the Wells Fargo Bank Tuesday morning. Their personalized designs included the likes of Elsa from the “Frozen” franchise, and Jack Skellington of “The Nightmare Before Christmas” fame.

“It’s good for them, because it’s something out of the classroom,” said Mack Benn Jr. art teacher Lydia Dommel. “They get to paint on a surface that they usually don’t get to paint on, and then when they come through with their families to show them the art, it’s something special that they got to do to show off their creativity.”

Saniya Allen, 10, and Max Venable, 10, were two of the 10 Oakland Elementary School fifth-graders that painted the windows of The Plaid Turnip restaurant. Saniya painted ornaments and some of the painted turnip on the window, while Max painted a snowman.

“I love the detail, and the fun of it,” Saniya said when asked what she likes about art.

Their works will be seen by many more throughout this holiday season in downtown Suffolk.

“I think that it’s great that everyone gets to see the art,” Max said.

Shoppers came to North Main Street for the {Re}Stored Pop-Up Shops in downtown Suffolk on Small Business Saturday, where they... read more