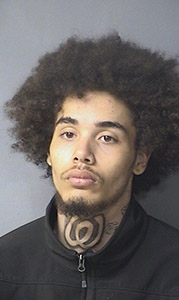 A Norfolk man was convicted of a slate of felony charges after a bench trial that lasted about four and a half hours on Monday.

Yasir Malik Smith, 21, was the defendant in a shooting incident from about a year ago. The victims were returning home from a night out on the early morning of Dec. 8, 2018, and noticed Smith inside their other vehicle when they pulled up to their condo on Bennetts Meadow Lane.

The victims testified Monday they had been out at a comedy club in Virginia Beach that night and that neither of them drinks. They pulled up to their house in their truck and saw a man’s legs sticking out of their Buick.

Initially thinking simply the person was asleep or had gotten in the wrong car, the couple testified they maneuvered their truck into their yard, shining its headlights onto the Buick and at the person in it. At some point, they revved the engine in an attempt to wake him, they said.

Eventually, Smith fled the Buick and ran past the truck, shooting as he went. One bullet shattered both front windows and whizzed in front of the couple’s faces as they ducked for cover. The rear quarterpanel, the tailgate and the couple’s home all had bullet holes by the time the shooting ended.

Distraught, the couple drove to the Suffolk Police Precinct 2 on Bridge Road, calling 911 as they drove.

Smith was later identified with the help of video from Ring doorbells in the area. He evaded arrest for about a month, fleeing a traffic stop in Norfolk and earning the title of Hampton Roads’ Most Wanted, before being arrested by U.S. Marshals.

Smith admitted he was rifling through the Buick looking for something to steal. He maintained in an interview with police, in an interview with a TV news station at the jail shortly after his arrest, and in court on Monday that he felt his life was threatened because the truck was “coming at him,” and that’s why he shot at the truck as he fled.

The victims had testified the truck was in park the entire time it was on the grass shining its lights on their Buick.

Judge Robert H. Sandwich Jr. questioned why the shots were fired at the side and back of the truck if Smith was shooting because the truck was coming at him.

Smith’s defense attorney, Daymen Robinson, indicated after the trial that an appeal is likely.

“This is an ongoing process,” he said. “We hope at some future point, there will be another look at the facts.”

Smith’s sentencing is set for Feb. 24.

One person dies in bridge crash