Searching for ghosts in the Nansemond 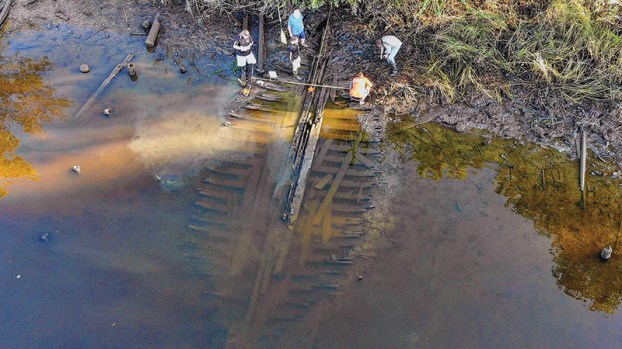 A team works to uncover information on the remains of a boat in the Nansemond River near downtown Suffolk. 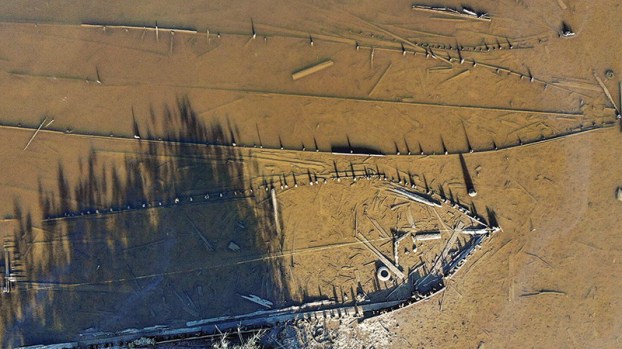 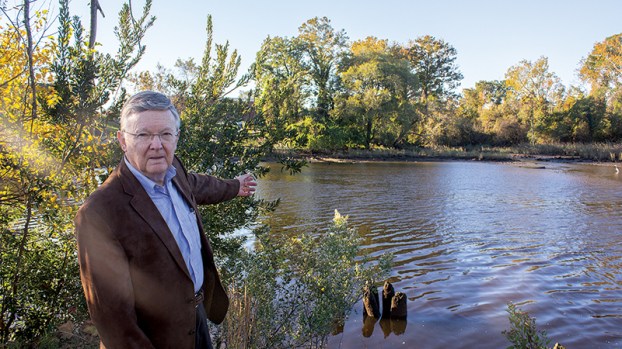 Local historian Kermit Hobbs shows the area in which he was among the first to notice the remains of boats partially buried in the riverbed of the Nansemond River near downtown Suffolk. 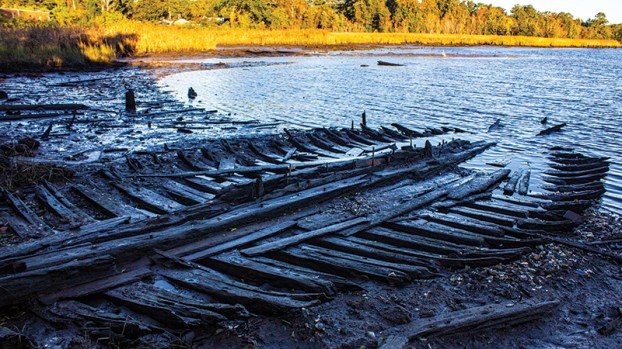 Local historians noticed the remains of boats sticking out of the riverbed at low tide on the Nansemond River one day, and it has led to some amazing discoveries.

Archaeologists have been scouring the Nansemond River to dive deeper into the Suffolk “Ghost Fleet,” a project that’s shining a light on local maritime history and waterlogged relics that date back to the Civil War.

This search began two years ago with another search entirely, when two men were looking for an old dugout canoe in the Nansemond River.

Suffolk historian Kermit Hobbs and his friend John Cross were searching for the canoe in early 2017 in the banks of the Nansemond River, in the area behind the Walgreens on West Constance Road.

This canoe was eventually recovered and transported to the Riddick’s Folly House Museum, and was later added to the Mid-Atlantic Logboat Registry.

But it was in their search for this canoe that Hobbs and Cross found something else sticking out of the mud. Hobbs said it looked like rows of sticks that poked out of the water.

They came back later with a drone for a bird’s-eye view of their discovery. Footage and photographs captured by the drone during low tide revealed wooden frameworks of boats in the mud — the outlines of watercrafts from long ago.

The images stunned Hobbs and Cross, and can be seen online in the “Nansemond River Ghost Fleet” video on YouTube.

“I was excited,” Hobbs said. “It’s a history buff’s dream to make a discovery, and this was something really neat. Something I had never seen before.”

Bob and Mary Hayes were drawn to the recovered logboat in fall 2018, after reading a Suffolk News-Herald article about the finding. Hobbs shared his drone video of the Ghost Fleet with them while they were locating the exact location of the canoe on the riverbank.

A pair of amateur archaeologists and historians, Bob and Mary Hayes recognized the “potential significance” of the Ghost Fleet vessels and the overall site, according to an email from Bob Hayes. They shared the video with Broadwater over dinner later that fall.

The three of them then did their first field reconnaissance of these ghosts in late April. They were already researching the history of the Suffolk riverfront in the late 19th century, digging into early records and sketchbooks of the area.

“Mary and I are excited that we were able to share Kermit Hobbs’ video of the Ghost Fleet with professional maritime archaeologists and get them excited about investigating the site,” Bob Hayes wrote. “To be part of the team helping to research something of historical significance to Suffolk is all that we could ever ask for.”

Because of the number and sheer size of the vessels, Hayes wrote, they needed to bring in people with more professional expertise in maritime archaeology.

The project grew into a combined effort between multiple agencies and Suffolk organizations, including the Virginia Department of Historic Resources, which is providing support through funding and staff assistance.

Progress was made in the mud through a two-week investigation in October. Brendan Burke, an archaeologist with the Lighthouse Archaeological Maritime Program, based out of the St. Augustine Lighthouse and Maritime Museum in Florida, presented their findings at a presentation to the Suffolk-Nansemond Historical Society on Oct. 7.

“The project was planned and organized for several months prior to field work in October,” Burke wrote in an email. “Archaeologists and support staff participated from three states and five organizations. This collaborative approach was able to achieve much success in learning about Suffolk’s maritime history.”

Burke and his team have thus far identified 13 different boats in their search area of the Nansemond River, starting from the initial Hobbs site, as it’s been called.

“We cleaned off timbers to record details of vessel construction and searched adjacent waters to identify historic watercraft hidden below the low tide line,” Burke wrote. “Additionally, Fairfield Foundation, a non-profit research group in Gloucester, assisted us by providing a drone and drone pilot to record the wrecks from the air.”

Burke’s team even constructed 3D renderings using more than a thousand pictures of the wrecks and specialized software. The acuity of these images is brilliant — down to 0.08 millimeters in accuracy, Burke said.

“The ability to generate a 3D model of an archaeological site using hundreds, or thousands, of pictures allows us to record things that we may not be able to using traditional manual recording techniques,” Burke wrote. “Additionally, intertidal sites are only exposed for brief periods, and 3D photo modeling enables us to work quickly to gather a lot of data that in years past would have taken hundreds of hours to record.”

The vessels range from 15 to more than 80 feet in length, and are considered to date back from the Civil War era to World War I. They include working craft boats and others for transportation, lumber and oysters.

As of Nov. 4, Burke and his team believe they have narrowed down the vessel referred to as the “Hobbs site.” Burke said in a phone interview that they believe this was a square-rigged bugeye, a unique Chesapeake Bay watercraft, and they’ve been able to narrow it down to a list of about 13 vessels registered in the Chesapeake Bay area.

“A couple of the attributes that were in the timbers left in the mud indicated design features that are only consistent with the square-rigged bugeyes, which is a small sample of all the bugeyes built,” Burke said.
These oystering crafts are crucial, based on the findings the team and its local partners have uncovered so far regarding the oyster industry in Suffolk and the surrounding region.

Through the Library of Congress, Library of Virginia and Suffolk-Nansemond Historical Society’s records, history has been pieced together regarding an oyster plant on this part of the Nansemond River.

Using Sanborn fire insurance maps and other documents going as far back at the late 19th century, the investigation has highlighted the story of William Norman McAnge.

“It was the work of Brendan Burke and LAMP through finding the historical Sanborn Fire Insurance maps that truly identified the McAnge oystering business in that area and offered a possible link of the vessels to that business and time,” Bob Hayes wrote in an email.

McAnge and his wife moved to Suffolk from South Carolina in the 1880s, and they remain interred at Cedar Hill Cemetery to this day.

According to an 1899 volume of “Confederate Military History,” McAnge first got into the lumber business at age 19, and from there went into the oyster business.

His success in the oyster business was “widely known throughout the United States,” according to the Confederate Military History volume. His oyster beds covered 275 to 300 acres in the Nansemond River and Chesapeake Bay, the Maurice River in New Jersey and the sounds of North Carolina.

“He ships more fresh oysters to the South and West, through the great territory between Chicago and New Orleans, than any other man in the States,” the volume reads. “His headquarters are at Suffolk, and he keeps constantly engaged a fleet of his own oyster boats, operating with such system and regularity that it is very seldom an oyster remains in his packing house over a day.”

An 1898 Sanborn Fire Insurance Map of Suffolk clearly shows the William N. McAnge and Co. Oyster Packing House projecting from the south bank of the Nansemond, close to where the boat remains have been found.

An ad and illustration of McAnge’s business are in the 1886 book “Sketches of Suffolk” by Edward Pollard. But his business interests went even further inland.

McAnge also had interest in the Nansemond trucking industry, according to the Confederate Military History volume, and he was “heavily interested in the manufacture of fertilizer for peanuts, selling about two thousand tons annually.”

At the Oct. 7 historical society meeting, Burke showed how boats would bring oysters to the McAnge plant to be processed. Oysters went to the nearby canning factory, and shells were burned in a kiln downtown for peanut field fertilizer.

“McAnge’s operation wasted no motion or product,” Burke wrote. “Oyster shells were burned in a kiln to produce lime for peanut farmers in southeastern Virginia. McAnge also helped bring the telephone to Suffolk, likely because his business benefited from the immediate communication telephones introduced.

“He had businesses in New Jersey and North Carolina,” Burke continued, “and this innovation probably enabled him to best direct those operations remotely. McAnge really seems to have been an innovator.”

For the next phase of the project, Longwood University archaeologists and students will use a laser-scanning device to collect enough data for a 3D model of the wreck site, and Burke and his team will continue to study their findings thus far.

The work will take time, but Burke is grateful for all the partners his team has found for this project, including many in the Suffolk community.

“Collaborative projects bring communities together,” Burke wrote. “We are happy to partner with so many knowledgeable people and groups to learn about the maritime history of Suffolk and the lower Chesapeake Bay. As a science, archaeology requires not only patience but many participants to make and keep it democratic.”

Citizens are sharing information and collaborating to protect their local ghost ships, spreading this Suffolk history far and wide.

“You cannot protect and understand what you don’t know,” Burke wrote. “Learning about these vessels and the maritime history of Suffolk and the Nansemond River is what enables it to be protected. This is a history to learn from, to cherish, to expose honestly, and the more we know about it, the better we can protect it.”