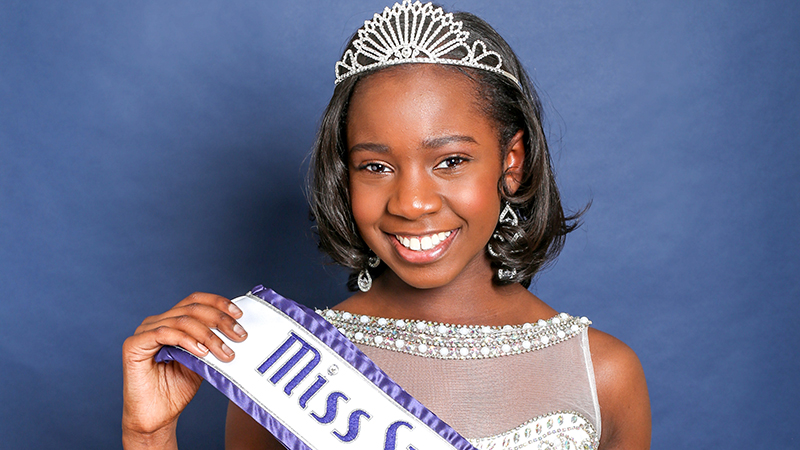 A Suffolk middle schooler is pursuing pageantry to help raise awareness for others with chronic diseases like hers and is also committed to volunteer work that helps others in need.

She will compete at another pageant on Jan. 25, and recently competed in the Miss Chesterfield Pageant in Midlothian on Jan. 4.

“I didn’t win, but I had a really good experience and I learned a lot. It was really fun,” Ayana said in an interview Friday.

Ayana has sickle cell disease, an inherited disorder in which red blood cells are abnormally shaped.

According to the Centers for Disease Control and Prevention, while healthy red blood cells are round and move through small blood vessels to carry oxygen throughout the body, people with sickle cell disease have red blood cells that become hard, sticky and C-shaped — like the shape of a sickle.

“The sickle cells die early, which causes a constant shortage of red blood cells,” according to cdc.gov. “Also, when they travel through small blood vessels, they get stuck and clog the blood flow. This can cause pain and other serious problems such infection, acute chest syndrome and stroke.”

Ayana said that she competes in pageants to bring more awareness to sickle cell disease and other chronic conditions. Her platform is called “Ayana’s READ Initiative: “Readiness to Empower, Advocate and diminish hopelessness in chronic Disease.”

Ayana said it’s important to raise money for families of children that have a chronic illness like hers and may not be able to afford treatments.

“I think it’s very important that we raise money for them so that they have the finances to get the services that they need. I’m blessed to have the chance to get treatment whenever I need to, but some kids don’t,” she said.

Ayana’s work for others doesn’t stop at pageants, either. She also volunteers her time to different organizations and to help provide comfort to hospitalized children.

That’s why she created Ayana’s Hope Cells last year, in which she makes decorative, heart-shaped pillows that are decorated with smiling faces.

She started with $50 of her savings to order heart-shaped pillows, according to an email from her mother, Hermionne Johnson.  These were decorated and delivered to Children’s Hospital of the King’s Daughters on Oct. 8.

“I came up with this idea because I wanted kids to have a comfort object with them when they get admitted to the hospital,” Ayana said.

Ayana is also active with Sickle Cell Association Inc., and on Nov. 9 she spoke and danced at the association’s Red & Black Benefit Soirée in Virginia Beach. She also received 20 pillows at the event for Ayana’s Hope Cells, which were then delivered to CHKD.

Dancing has been very important to Ayana. She said it started as a coping mechanism, a way to help manage the stress of her chronic condition, and it’s become one of her favorite activities.

“I love performing in front of an audience and being passionate about it,” she said. “I love to just express myself in a way that I don’t necessarily have to speak to speak or act. I just move my body and create new movements, which is something I enjoy a lot.”

She also plays the violin in the Col. Fred Cherry Middle School orchestra and is a member of the school’s Ladies of Distinction club, plus the National Beta Club.

Furthermore, she’s put in more than 400 hours of community service in the past 12 months.

Her community service included volunteering in the soup kitchen and food pantry at her church in Newport News, St. Vincent de Paul Catholic Church; speeches she gave for Sickle Cell Association fundraising; and volunteering with the Suffolk Sheriff’s Office at last year’s National Night Out, and their Back to School drive in September.

She also helped raise $1,500 toward relief efforts for those in the Bahamas that were devastated by Hurricane Dorian last year.

“I’m very blessed to have what I have and have a good family, have a roof over my head and have food to eat,” she said. “I think it’s really important to go back into your community and help those who are less fortunate than you.”

She also advocates for the National Marrow Donor Program’s “Be The Match Registry.” Learn more at join.bethematch.org/AyanaVsSCD.