Young earns Freshman of the Week 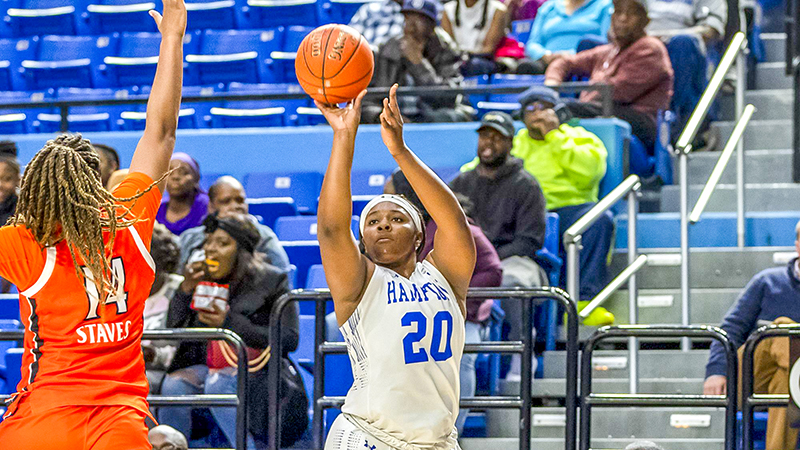 The former Lady Bulldog said she is grateful to have earned the honor, which is likely among the first of many steps to her bright future at Hampton. Within the past couple of weeks, Young has felt like she has caught a rhythm in the second half of her freshman season.

“I was still trying to get a feel for the different environment,” Young said. “Just getting used to the way people play and the pace of everything. But I feel like I’ve hit that point to where I have a good rhythm going.”

Even though Young continues to adjust to the NCAA Division I level, she knows once she reaches that point, she will be fine. The Big South Conference has some strong teams, and Hampton’s non-conference schedule has been challenging as well, but Young knows the experience will all pay off in the end.

“I just have to remember that this isn’t high school anymore,” she said. “I have to play completely different to compete at this level and continue to be successful while doing it.”

Hampton is 8-7 right now with a 4-2 conference record. Young has started 13 of the 15 games so far this season and averages 28.4 minutes a game. She is fourth on the team in scoring with 9.7 points a game to go along with 6.2 rebounds per game. As the season goes on, Young believes she will continue to get better, which she seemed to do every year she stepped on the floor at King’s Fork.

At King’s Fork, Young had a decorated career, as she was a two-time All-State selection and two-time Southeastern District Player of the Year. She scored more than 1,000 points for her career and is a two-time Suffolk News-Herald Winter Female Player of the Year honoree. She also holds the school record for most points scored in a game, with 52 last year during her senior season.

Brown goes for 31 in Saints win