You Asked: Why is Virginia ‘for Lovers’? 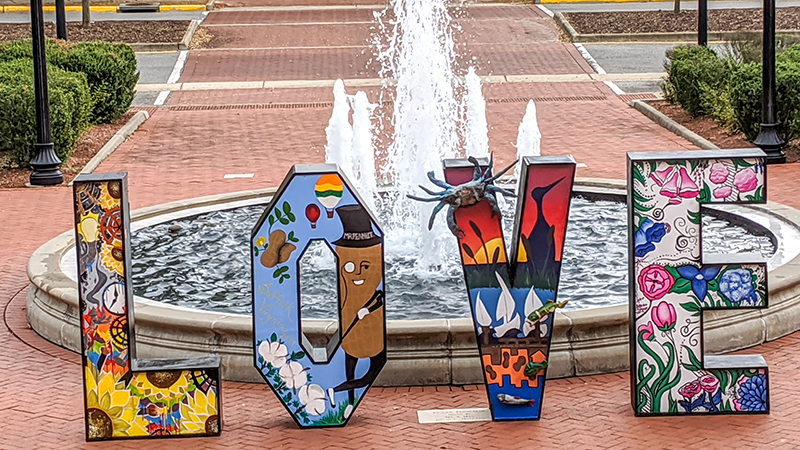 A new LOVEworks sign was unveiled last year outside the Suffolk Center for Cultural Arts. The sign was designed and created by students at Lakeland, Nansemond River and King’s Fork high schools, as well as Nansemond-Suffolk Academy.

A Suffolk reader recently asked via email what the story was behind the famous “Virginia is For Lovers” slogan, and the website virginia.org had the answer.

According to virginia.org, “Virginia is For Lovers” was created more than 50 years ago and is now “one of the most beloved and iconic slogans in the world.”

The slogan was inducted into the Madison Avenue Advertising Walk of Fame in September 2019, and it was also inducted in the Advertising Icon Museum, which “came on the heels of Forbes.com tapping ‘Virginia is for Lovers’ as one of the top 10 tourism marketing campaigns of all time,” virginia.org states.

According to virginia.org, the catchy slogan was adopted by the Virginia State Travel Service — now known as the Virginia Tourism Corporation — in 1969.

It was a slogan fit for 1969. The novels “Love Story” and “The Love Machine” were popular in 1969, and the Woodstock Music and Art Fair drew more than 300,000 young people in that same year for a weekend of “peace, music and mud,” according to virginia.org.

“Given the tenor of the times, the roll-out of ‘Virginia is For Lovers’ appealed to younger consumers who were the market of the future,” virginia.org states.

But the phrase itself came from a creative team led by George Woltz of Martin & Woltz Inc., the Richmond ad agency that won the Virginia State Travel Service account in 1968.

According to Martin, copywriter Robin McLaughlin came up with an advertising concept that would be tailored for specific kinds of ads — for example, “Virginia is for history lovers” and “Virginia is for beach lovers.”

But that was thought to be “too limiting,” according to virginia.org, so the agency just dropped the modifier, and “Virginia is For Lovers” was born. The slogan then made its official debut in a 1969 issue of “Modern Bride.”

“The phrase was considered bold and provocative, but it was also just plain smart from a marketing perspective,” virginia.org states. “It planted a seed — a new image of a more exciting Virginia — with a generation that would become the most sought-after group of spenders ever to wield a credit card.”

That’s the story of why “Virginia is For Lovers,” but this story is by no means over, as the “LOVE” keeps spreading.

Suffolk received some “LOVE” in November, when the latest LOVEworks sign was unveiled at the Suffolk Center for Cultural Arts. Students from four schools — Lakeland, Nansemond River and King’s Fork high schools and Nansemond-Suffolk Academy — designed and painted each of the sign’s 6-foot letters.

It was the first permanent installation of the LOVE letters in Suffolk, and one of more than 190 such LOVEworks signs throughout the state.