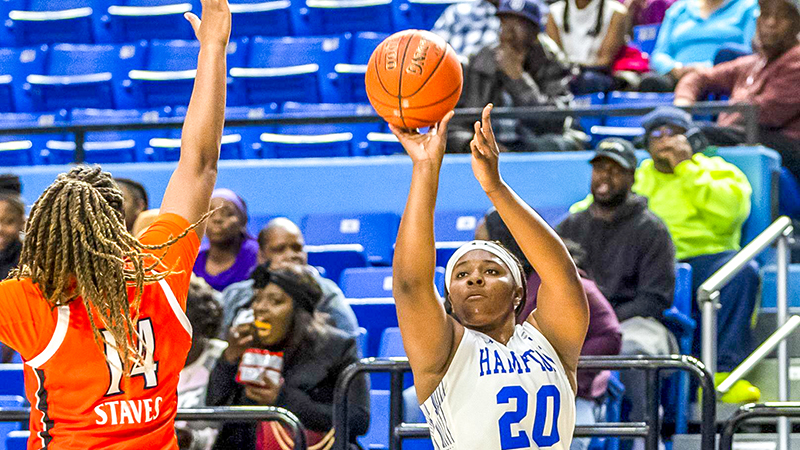 For the third time this season, former King’s Fork High School standout Nylah Young has been named the Big South Freshman of the Week for her performance at Hampton University. (Mark Sutton Photo)

For the third time this season, Suffolk native Nylah Young has earned the Big South Freshman of the Week honor.

The former King’s Fork High School standout Nylah Young continues to impress in her freshman season at Hampton University. For the third time over the last few weeks, Young recently was recognized as the top freshman of the week in the Big South.

Young averaged 18 points and shot 45.5 percent from the floor and grabbed an average of 7 rebounds in two conference wins last week. Facing Longwood, she scored a career-high 29 points while grabbing 13 rebounds and getting three steals. She also had seven points in a win at UNC—Asheville while playing through an illness. Young is now up to 12.1 points per game 6 rebounds per game and leads the team with 14 blocked shots.

“I’m very grateful for these honors,” Young said. “I feel good about how I’ve been playing lately. I’m really finding my groove.”

Young felt Hampton’s first meeting with UNC—Asheville on New Year’s Eve is when she started to get going. She played 25 minutes that game, and things have started to change for her. The more plays she has made, more plays are being run for her, and she’s taking advantage.

She feels her time at King’s Fork and the roles she played there helped prepare her for how well she is playing now. In her career-high game of 29, Young felt like she was in a rhythm and tried her best to keep it going within the flow of the game, instead of pushing hard to get it.

“Coach is seeing that I’m becoming a threat to defenses, so he’s putting more plays in for me so I can continue to do that,” she said.

As the season goes on, Young is looking forward to building on her performances. With every game, she is continuing to make a name for herself at the NCAA Division I level.