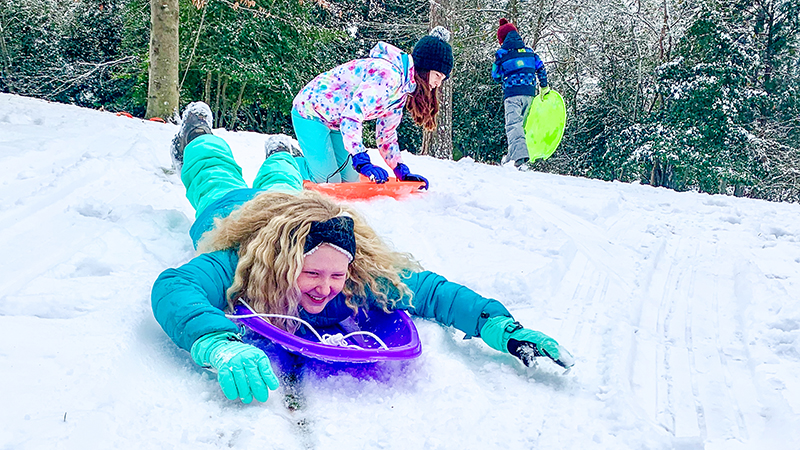 Madi Blair enjoyed going sledding in her neighborhood during a snow day on Friday. With all local schools on vacation, children throughout Suffolk got together for sledding, snowball fights, building snowmen and more. (submitted photo)

Residents across Suffolk enjoyed the snowfall that fell Thursday and early Friday by building snowmen, sledding and engaging in all kinds of winter fun.

The National Weather Service Wakefield office posted snowfall reports Friday morning on weather.gov, including reports of about 4 inches of snow in Suffolk.

Larry Brown, meteorologist with the NWS Wakefield office, said there was approximately three to four and a half inches of snow across most of the city. The snow lasted for about a 12-hour period from Thursday afternoon into Friday morning, based on information from Suffolk Executive Airport.

Light rain began around 1:30 p.m. Thursday and turned to snow around 3 p.m., then lasted for about 12 hours. The snowfall varied between lighter and heavier amounts, and according to Brown, was “pretty close” to expectations.

Moving forward through the weekend, however, the forecast brightened.

On Friday afternoon, the NWS Wakefield office forecast for Suffolk — based on Suffolk Municipal Airport — projects a high temperature near 50 degrees on Saturday and a low of around 27 degrees Saturday night. The Sunday high will be near 57 degrees, with a low of around 34 degrees that night.