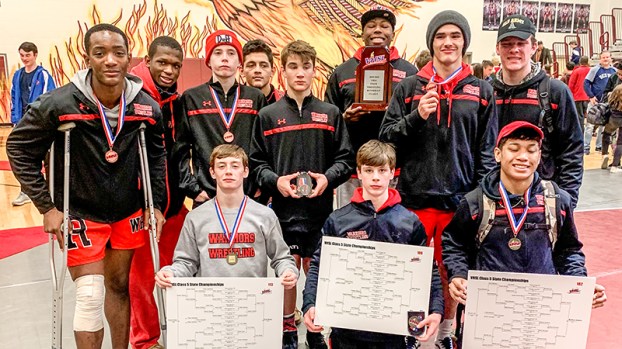 For the second straight year, the Nansemond River High School wrestling team finished as the runner-up in the Class 5 state tournament.

The Warriors wrestling team went to Ashburn last weekend to compete in the Class 5 state tournament. The Warriors had their eyes on winning the school’s first team title. Even though they didn’t bring home a team title, they made school history by coming home with three individual state champions, the most in one state tournament for Nansemond River. Overall, Coach James “Tripp” Seed felt good about how the Warriors wrestled.

“I thought we wrestled well,” Seed said. “We knew it was going to be a little tough with the amount of guys that the team that finished in front of us had, but the guys wrestled well. We did about everything we could do. I told the guys that I was proud of them.”

Owen Rawls, Evan Rawls and Matt Henson came away with state titles for the Warriors. Owen won the state title at 106, while his brother Evan won at 113. Henson took home the title at 182.

“It didn’t go exactly as planned, but we did our best, and all of our state qualifiers still have a chance next year as well,” Evan Rawls said.

“I feel absolutely honored to be a state champion,” Henson said. “It’s always been a long term goal of mine. I would not be where I am today if it wasn’t for my great Nansemond River teammates.”

Braxton Lewis finished as a state runner-up, while Andrew McDougal and Matt Prevatte placed fourth. Madsen Jean finished sixth. Nansemond River will have all of their state qualifiers returning for next season.

“Even though we didn’t quite get the title, we have all of these guys returning next year, which is exciting for us,” Seed said. “I’m just proud of how they all wrestled, and they all conducted themselves as a team. We are just going to continue to build off of this.”

After having no individual state titles in more than 20 years, Nansemond River now has five in the last two years. Seed believes the program is continuing to trend in the right direction, and it’s becoming more and more evident that the Warriors are becoming one of the powerhouse wrestling programs in Hampton Roads.

Bulldogs hold No. 2 seed for region

The King’s Fork High School boys’ basketball team will host a game Monday night as the No. 2 seed in... read more