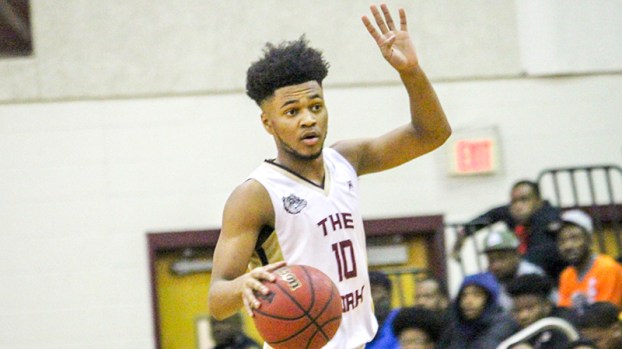 A year ago, the King’s Fork Bulldogs had their state tournament dreams halted a win short when the Churchland Truckers defeated them 60-52 to knock them out of the regional semifinals.

One year later in their very gym, King’s Fork played host to a dangerous seventh-seeded Churchland squad in front of a packed house at The Kennel, but this time the Bulldogs were determined for a different outcome.

King’s Fork outscored the visiting Truckers in three of the game’s four quarters, including by a count of 24-20 in the final frame to pull away for a 90-79 victory that puts them back in the regional semis and one step away from the VHSL Class 4 state playoffs.

Leading the way was sophomore point guard Jayden Epps, who scored 20 of his game-high 31 points before halftime. The game brought the career point total for Epps to 999.

Most importantly, as the game was winding down and Churchland had cut a 15-point deficit down to just two at 66-64 in the fourth quarter, Epps found his teammates — sophomores Bravion Campbell and George Beale — for key baskets. He also had six rebounds and five assists to go with his usual high scoring.

Another thing Hite was glad to see was how his squad reacted to the zone defense the Truckers threw at them. King’s Fork jumped out to a quick lead, shooting 60 percent from the field both in the opening quarter and first half. They finished 7-of-19 behind the three-point line.

“We see some type of zone everywhere we go,” Hite said. “We knew it was coming, and I told our guys to shoot the basketball, rebound and play aggressive against the zone. People throw different junk defenses at us. You just have to be aggressive and rebound if you do miss.”

Tyler Chatman was the biggest beneficiary of the zone, with 24 points, including a perfect 13-of-13 from the foul line.

“Part of being a good guard is getting to the line and making them. Tyler’s sneaky quick, but he also has high basketball IQ, so he knows when to use the head-fake and when to pull up.”

In addition to Chatman and Epps, the Bulldogs had two others in double-figure points, as Campbell scored 15 and Beale chipped in 13 to go with eight rebounds. Churchland committed 30 fouls, and the Bulldogs finished 29-of-40 from the charity stripe.

At 20-3 overall, the second-seeded Bulldogs take on a third-seeded Menchville squad — which eliminated Lake Taylor 72-61 in another quarterfinal in Suffolk on Monday night — in Wednesday’s regional semifinals held at 6 p.m. at Smithfield High School. It’s a matchup many anticipated would take place before the 2019-20 campaign even got under way.

“We kind of have been eying each other all year,” Hite admitted of two teams that began the season ranked No. 1 and No. 2 in the state in Class 4 by the VirginiaPreps.com rankings. “Both coaches are fiery, and we expect a lot from our players. The team that puts forth the best effort will probably come away with the victory. We were going to have to play at some point, and here it is.”