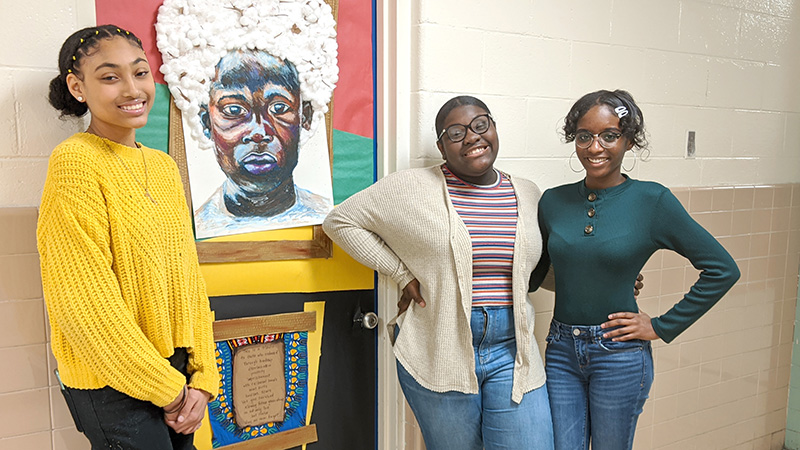 When Mikah Anderson, Destiny Caravello and Laila Gaddist started at John Yeates Middle School in the sixth grade, they were surprised to learn it did not have a program for Black History Month.

A year later, when it again looked like there wasn’t going to be anything happening, they did something about it.

“Last year, in the middle of February, we just kept realizing there was nothing going on for Black History Month,” Destiny said. “We were expecting something to happen, maybe some kind of program, but we realized there was nothing coming up, so we decided to do announcements of different people, reading their biographies, and writing our own biographies, just talking about things that were going on during Black History Month about different schools, about any events you could attend.”

This year, as eighth-graders, they wanted to do more.

With permission from the principal, Dr. Wendy VanHosen, the girls, all 14 years old, organized and put together a Black History Program, which featured a “wax museum,” a choral performance and a guest dance performance.

With all three having a musical and dance background, they knew they wanted to incorporate those elements. They also wanted to have a wax museum of people portraying impactful and influential people in black history.

They began planning it in November, and on Feb. 25, about three months later, carried out the program.

“We planned it with Dr. V,” Destiny said. “It took a lot of planning, but we got it done.”

The Dawn of the Phoenix Dance Company, a nonprofit organization led by founder Erica Ellison, were the guest dancers, performing to a pair of songs from the movie “Harriet,” based on the life of abolitionist Harriet Tubman.

“I am very proud of the initiative of the students and their diligence in seeing this event through,” VanHosen said.

Mikah, Laila and Destiny said they could not have pulled off the program without VanHosen’s support and guidance.

“Immediately when we told her, she was just on board with it,” Destiny said, “because she knew us from last year. We came to her because we were very concerned because there was nothing going on, and that has to be represented, especially in middle school when you’re finding yourself.”
“Being able to understand what’s actually going on in the world these days,” Laila said, continuing. “And us all being African American women, it really meant a lot to us that we were able to do something like this.”

The chorus performed three songs, “Route 66,” “Lift Every Voice and Sing,” and “It Don’t Mean a Thing (If It Ain’t Got That Swing),” to which Laila and Destiny performed a tap dance.

The event got a strong turnout, which pleased the trio, especially considering the many after school and other activities available for students.

“One of our biggest fears about it was whether anyone was going to show up,” Laila said.

Said Mikah: “Overall, people seemed to really like it. They liked the idea. They were all supportive of everything that went on in the program.”

They said the event had a deeper meaning for them, because they were the principal organizers of it.

“It felt really good, especially the fact that we were able to put it together ourselves,” Laila said. “It was like, ‘Wow, we did that. We planned this ourselves, with Dr. V as well. We planned this, and it happened.’”

Destiny said VanHosen empowered them to flesh out the idea and create the program, and they appreciated receiving the trust of an adult and getting a leadership opportunity.

“It was more than just telling Dr. V we had an idea,” Destiny said. “She really gave us a chance to express ourselves. She was very supportive of everything that we said, and she let us lead. Sometimes we’d ask her questions, like, ‘How do we want to do this?’ And she’s like, ‘Well, it’s your program. What do you want to do? It’s not what I want to do. It’s what you want to do.’”

Still, they also got a lot of feedback from friends who wanted to be a part of the program.

Even though they will move onto high school next year, they want to continue to help build the Black History Month program at John Yeates.

They felt like it was their program, and it made them proud to teach others about black history.

“It was good to feel like you were making a difference,” Destiny said. “You’re informing people about someone they may not have known about. Like me, I was Misty Copeland, and when I say the name, not many people know who she is. But to teach someone that is just great, and then having them ask you questions and then knowing they’re probably going to go home and try to figure out who this person is, what they’ve done, it’s a really great feeling.”