Blood pressure: Check it, change it, control it 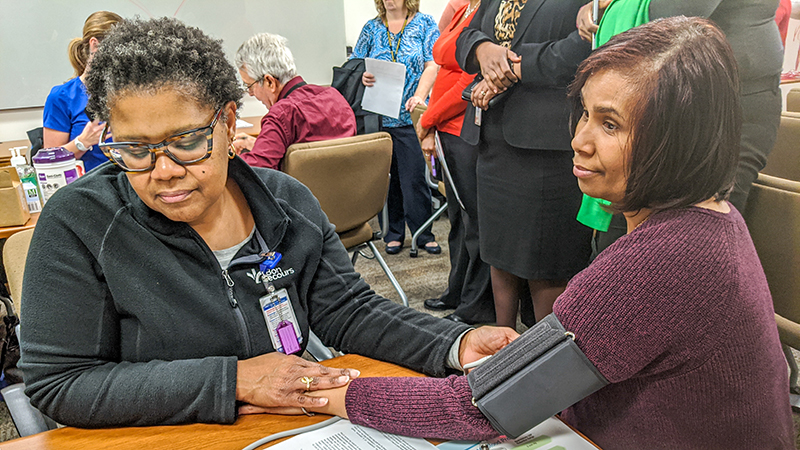 Catina Myrick of the city’s Planning Department gets her blood pressure checked by Vondia Smithwrick-Lee, a licensed practical nurse with the Bon Secours Care-A-Van during last week’s kickoff to the four-month program “Check. Change. Control.” for city employees.

Becky Brown’s mother was diagnosed with congestive heart failure about 15 years ago while in her mid-50s.

She noted her mother had been a smoker and had a family history of high blood pressure. Because her mother did not control it over the years, it’s only gotten worse, with her heart now functioning at just 25 percent.

“It all could have been prevented with other lifestyle factors, but specifically managing high blood pressure,” said Brown, employee health and wellness coordinator for the city of Suffolk. “Just from the impact of seeing her, and being on oxygen, me being her only caregiver, working, even if you are not the one who has the high blood pressure and having trouble, it’s going to impact you and your family and everything you do.”

Brown told this to groups of city employees last week at the kickoff to a four-month program by the American Heart Association and Bon Secours Mercy Health to help them improve their heart health.

In kicking off the program, MeShall Hills, executive director of the Hampton Roads chapter of the association, said more than 35 percent of all people in Hampton Roads have high blood pressure, and it is a leading risk factor for stroke and heart attack.

“At the American Heart Association, we want to help you reduce your chances of stroke and heart attack by offering this ‘Check. Change. Control.’ program,” Hills said.

The program, which includes education on nutrition, hypertension and physical activity, is evidence-based and empowers people to take control of their health, Hills said. It involves participants having their blood pressure checked at least twice per month.

A “Check It. Change It.” program began nine years ago, and it showed when people checked their blood pressure eight times in a four-month period, systolic blood pressure decreased by 10 points. That program has evolved to the current Check. Change. Control. Program.

“So that’s how we say this is evidence-based, because we’ve done a program like this already and seen success,” Hills said.

She noted that high blood pressure is known as the silent killer because it has no symptoms and can lead to deadly consequences such as heart attacks, heart failure, strokes, vision loss and kidney damage.

“When you have uncontrolled hypertension, you may not feel it, but it’s wreaking havoc on your organs,” Hills said.

Hills said she was at an event in Franklin for parents of children involved in sports, and one of the children came over and asked to have their blood pressure checked. That 10-year-old child, she said, was at hypertension stage two. She got permission from parents to check other children and found just one child out of the more than 50 they checked who had blood pressure in the normal range.

At a recent event for adults, Hills said more than 80 percent of the 300 people who were screened were hypertensive.

“This is a problem,” Hills said. “This is an epidemic. We’re looking right now at what’s going on with the (coronavirus). This is also an epidemic. … This kills more people than any virus that’s out there, so we have to take this serious.”

“Every month we have a meeting at our hospital where we talk about how we can shave minutes off the time that, if someone had a heart attack right now here in this room, how many minutes it would take to get you to the cath (catheterization) lab and get that vessel opened up,” Braisted said. “But that’s all work, effort on that back end, way downstream, it’s too late. This is the exact kind of initiative we want to get involved in, because it’s upstream.”

High blood pressure (Hypertension) Stage 2: 140 or higher or 90 or higher

Hypertensive crisis (consult doctor immediately): Higher than 180 and/or higher than 120