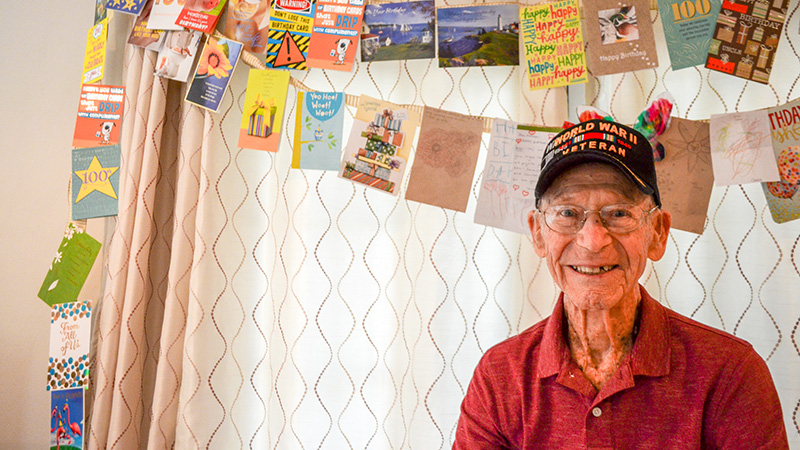 Suffolk resident Norbert Beck turned 100 years old on Friday. Pictured with Beck are the many birthday cards he received from friends and family. According to Beck’s daughter Suzanne Teumer, this project was the brainchild of Beth Ann Urso, a beloved niece from Pittsburgh, Pa.

A Suffolk family celebrated the landmark birthday of one of their own this past weekend, with Norbert Beck turning 100 years old on Friday.

Beck received a bounty of birthday cards from friends and family that were strung together to line a window inside the Suffolk residence he shares with his daughter, Suzanne Teumer, and her husband, Peter Teumer. This beautiful decoration of well wishes was the brainchild of Beth Ann Urso, a beloved niece from Pittsburgh, Pa., Suzanne Teumer wrote in an email Monday.

Beck said on Wednesday that the secret to living such a long, fruitful life is to “enjoy something that happens every day.” A picture in his daughter’s Suffolk residence represents one of Beck’s best days: the day he married his late wife, June Luella Waller Beck.

“That, of course, was the happiest day of my life,” he said.

Norbert Beck was born Feb. 28, 1920, in Pittsburgh. He grew up with his family in the Etna borough of Allegheny County in Pennsylvania, and his first job as a kid in the 1920s was in the ice trade. He helped deliver big blocks of ice on horse-drawn carts.

He grew up to serve in the U.S. Army during World War II. He served as a first lieutenant in the 694th Ordnance Ammunition Company, according to Suzanne Teumer.

Stationed in France during the war, Beck recalled how he and his fellow men became familiar with villagers in town. They extended warm hospitality to them during, including champagne for 50 cents a bottle, he said.

Beck has photographs of himself during the war, alongside his brothers in arms. These were laid out on the table in front of him at the Suffolk residence on Wednesday.

“Long after the war ended, he remained friends with several of his fellow servicemen,” Suzanne Teumer wrote. One of them was even the best man at Beck’s wedding.

When he came home to Pittsburgh after the war, Beck returned to work as a bank teller at PNC Bank. He was engaged to a young woman at this point in time — but it wasn’t Suzanne Teumer’s mother.

“As love would have it, he met and fell in love with a beautiful fellow teller at the bank, June Luella Waller,” Suzanne Teumer wrote.

Beck bought another diamond ring and married June on Dec. 7, 1946. They built their own Sears Modern Home and raised a family, and he worked at PNC Bank for about 40 years before he retired.

After he retired, they bought a motor home and toured the United States for months. Suzanne Teumer said they had the “adventure of a lifetime,” and eventually found a new home to retire to in North Carolina.

“She was always there, (and) she’s a part of me,” Beck said about his wife.

Suzanne Teumer wrote that the “rise of technology” and “evolution of transportation” are the most remarkable advances that her father has appreciated over the course of his long life. That includes radio, television, personal computers, smartphones, and his invaluable iPad.

“He has kept up with learning each new advance, which has definitely kept his mind sharp,” Teumer wrote. Beck uses his iPad to keep up with the news, read today’s bestselling books, and make daily Facetime calls to family members.

Beck has four children, nine grandchildren and six great-grandchildren. His family praises his sense of humor and work ethic, and also his incredible, positive attitude.

“He’s a happy guy,” Peter Teumer said about his father-in-law. “He’s content, and he always was. He’s a good man.”

This Suffolk family looks forward to having even more time with their beloved father, grandfather and great-grandfather.