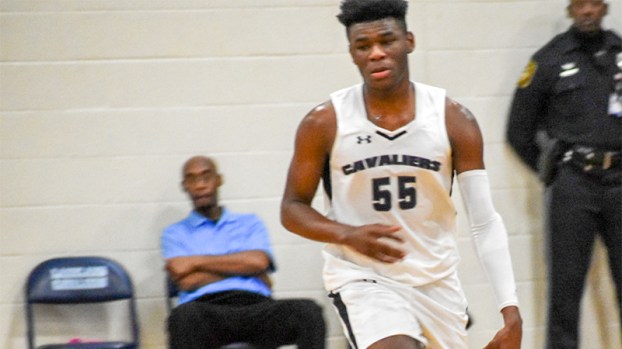 Keimari Artis was voted Suffolk News Herald Player of the Week after scoring 34 points in a region win for the Cavaliers.

Artis lets game do the talking

Keimari Artis was voted Suffolk News-Herald Player of the Week after scoring 34 points in a region playoff win over Park View High School.

This season has been one to remember for the Lakeland High School basketball team. The team was among the upper echelon in the Southeastern District, where they are the smallest school but pack some punch on the court.

After a successful regular season, the Cavs went into the region playoffs as a third seed capable of doing some damage. They went on a remarkable playoff run, winning four straight games to win a region championship. Artis’ best performance to this point in the season came during the second-round matchup against Park View, where he scored a career-high 34 points, including seven three-pointers.

“I was happy with my performance, but I was even happier with the big-time win,” Artis said. “It gave us more momentum for the next game. When I got going, I just kept telling myself to keep going. Don’t let up.”

After that game against Park View, Lakeland went on to knock off the No. 1 seeded Hopewell High School, just adding icing on the cake to what Artis described as his best season to date. There have been ups and downs, but Artis’ main goal was to get further and deeper into the playoffs, which they have done. Next, was to help his team win a ring, which Lakeland is three wins away from doing. Artis recently surpassed 1,000 career points, which was also a goal that was dear to him. His cousin, former Lakeland standout, Kayla Barnes, did so two seasons ago, and he knew that was something he wanted to accomplish as well.

The making of this Lakeland team could win the school a state title, and Artis and the Cavs know what they are capable of.

“My main goal is to win a ring,” Artis said. “Having that opportunity to compete in the state tournament is a big accomplishment. Also, being able to be on that 1,000-point banner with my cousin Kayla is a great accomplishment for me as well.”

Motivation comes in many forms, and sometimes it derives from tragedies in our lives. Unfortunately for Artis and his family, his aunt passed away in the midst of his senior season. He knew she’d be encouraging him to keep going and playing hard and, in turn, that has motivated him this season.

“I just want to make her proud,” Artis said. “I know if she was still living, she would be proud and would still be encouraging me to keep going, so I’m not satisfied.”

Artis’ strong senior season to this point earned him an All-District selection. Artis is still weighing his options for where he will be playing basketball next.