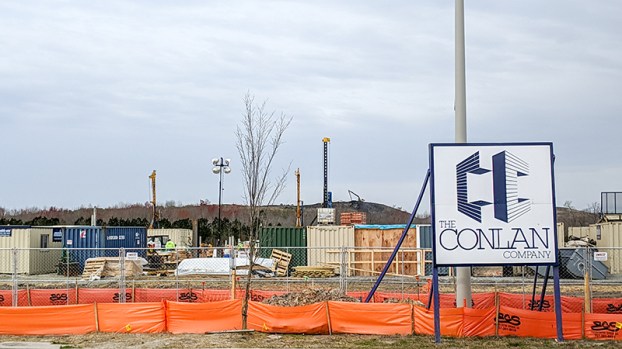 Northgate Commerce Park in Suffolk will be the site of Amazon’s 95-foot, four-and-a-half story robotics fulfillment center, which will be the largest industrial building in Virginia, and, encompassing 3.8 million square-feet, will be the second-largest in the state to the Pentagon.

Amazon is primed to deliver a sizeable presence of the world’s largest online retailer to Suffolk.

But the company will also have a significant presence in neighboring Chesapeake, as local, state and company leaders hailed the regional effort that secured the new facilities, which will be located just miles apart from one another.

In a deal formally announced Tuesday, Suffolk’s Northgate Commerce Park will be the site of a robotics fulfillment center and will be the largest industrial building in Virginia — second-largest overall to the Pentagon. The $230 million facility — according to the building permit for the site — will have a footprint of 822,833 square feet and, at 95 feet and four-and-a-half stories tall, will have an overall square footage of more than 3.8 million.

Workers at the Suffolk fulfillment center will work alongside robotics and other technologies to pick, pack and ship smaller-sized customer orders such as books, toys, electronics and home goods.

The city of Chesapeake’s facility in Western Branch will be a 650,000 square-foot processing center that will handle bulk goods and break them down into smaller orders that will feed its supply chain.

Both facilities are set to open sometime next year and bring a combined 1,500 full time jobs — 1,000 in Suffolk and 500 in Chesapeake.

“This affects all of Virginia,” Gov. Ralph Northam said during a press conference at Old Dominion University’s Virginia Modeling, Analysis and Simulation Center in Suffolk. “And when you talk about jobs, 25,000 new jobs that came to Northern Virginia with the fulfillment, the processing centers, another 10,000 jobs that create another 40,000-plus jobs in surrounding businesses, so this has been a big deal for Virginia to move our economy forward.”

Ardine Williams, Amazon vice president of workforce development, touted the access of the two sites to the Port of Virginia, along with a good infrastructure and strong workforce, good education system and collaboration among localities, as reasons for locating them in Suffolk and Chesapeake.

Williams also boasted of the company’s compensation package to employees, with $15 per hour minimum pay and benefits including full health, dental and vision, as well as a 401k package with a 50-percent company match and up to 20 weeks of paid parental leave.

“I think it really underscores our commitment to the commonwealth of Virginia,” Williams said. “It also highlights, I think, the collaboration of Hampton Roads, when you think about multiple cities coming together.  … It also really enforces the quality of education here and the workforce that’s available, because it’s really employees that make any endeavor successful, and so having access to the workforce here in Hampton Roads is tremendously important.”

Suffolk Economic Development Director Kevin Hughes said site plans for Amazon’s facility in Northgate Commerce Park were approved in December. The Conlan Company received a building permit from the city March 5 and dirt has been moving at the site, as it was Tuesday.

The Virginia Economic Development Partnership worked with both cities, along with the Hampton Roads Economic Development Alliance and the Port of Virginia, to secure the Amazon projects. The company is eligible to receive benefits from the port’s Economic and Infrastructure Development Zone Grant Program — the maximum allowed is $500,000 — along with funding and services to support the company’s employee training activities through the Virginia Jobs Investment Program.

Chesapeake Mayor Rick West said his city tried to get the larger facility that went to Suffolk.

“It is true, governor. There is a little bit of a rivalry here. I’m not going to stand up here and lie to you. We were pushing hard to get that thousand-job facility,” West said to laughter.

Later when posing for photos with members of Chesapeake’s City Council, he got more laughs when he said, “We’re number two, we’re number two. … in the state.”

However, West said both projects would not have happened without the two cities working with one another, in particular on Portsmouth Boulevard. He called it a new day in the region.

“In the old days, I think mayors would have probably fought and had a lot of pushing and nothing would have been done,” West said. “But today, I celebrate with Suffolk for a thousand jobs. And I know you celebrate (with us).”

Said Suffolk Mayor Linda Johnson: “We couldn’t have done this without the state. It took a lot of partners and a lot of work. … We cannot operate as individuals. Yes, we’re individual cities, and we owe to the people that elected us, but in order to give the people who elected us what they need, we’ve got to collaborate with everybody.”