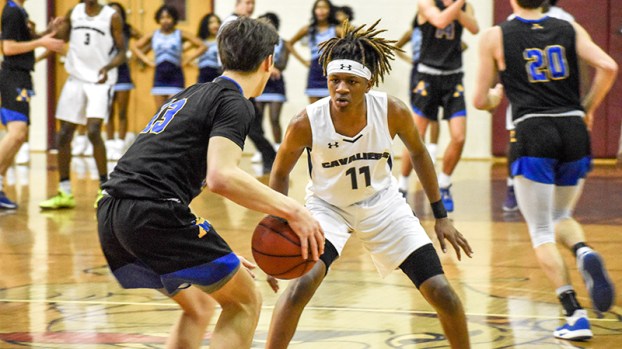 Senior Clint Wright Jr. defends for the Cavaliers earlier this season. Lakeland High School will own a split of the Class 3 state title.

Though it will not happen the way it was supposed to, the Lakeland High School and King’s Fork High School boys’ basketball teams will be crowned state co-champions in their respective classifications.

Everyone was disappointed Thursday afternoon to learn the state championship games set for Friday at Virginia Commonwealth University would not be played due to concerns about the ongoing COVID-19 pandemic.

Early Thursday morning, the Virginia High School League announced it would allow only immediate family of athletes into the arena to view the games, before deciding later in the day to cancel them altogether.

With the decision not to go on with the games, the remaining teams will all get a share of their respective classification’s state title.

With emotions running high, it was tough for the Bulldogs to accept the fact they won’t actually get a chance to play for the title.

“It is definitely disappointing, but we understand it is bigger than basketball,” Bulldogs Coach Rick Hite said. “We had a great season, and we did some great things, and I’m still proud of these guys. In some ways, we feel cheated, but the powers-that-be made a decision, and we have to roll with that.”

King’s Fork came into the season as one of the favorites for the Class 4 state title. They had exceeded every expectation and earned the chance to check off the final box.

The Bulldogs finish the season with a 24-3 record. Impressively, the Bulldogs had defeated three of the teams set to play for state titles — Wilson, Lakeland and Green Run high schools. They finished as the Class 4A region champion and at the top of the district.

“It’s tough, but I understand that health comes first,” Bulldog senior standout Tyler Chatman said. “I am very proud of my teammates and the coaching staff for what we accomplished this year with being state co-champions and winning a region title.”

Lakeland, which has 10 seniors on its roster, will not get a chance to compete in a final game. However, they do earn a slice of the Class 3 state title even though, like King’s Fork, they would rather have earned it on the court on Friday.

“We understand why VHSL wanted to be on the side of precaution, but we really wanted to see how we would do on that stage,” Coach Clint Wright Sr. said. “We feel like a title would have been icing on the cake for this season. We were a very relevant team this season, and we had beaten some very good teams through this process to get to this point. People may say, ‘Hey, you never actually won it,’ but we don’t make the rules; we just abide by them.”

The Cavs players were naturally disappointed but know at the end of the day they can call themselves state champions. They finish the season with an 18-8 record and a Region 3A title. Lakeland was a state runner-up in 1996 as a 2A school, but this is the first title for the school as a 3A.

“We are saddened at the fact we won’t be able to compete in the actual game,” senior Clint Wright Jr. said. “On the upside, we are state champions, and we reached our goal but wanted to earn it instead of it being given to us. Everyone was ready to experience that type of atmosphere and just enjoy the moment.”