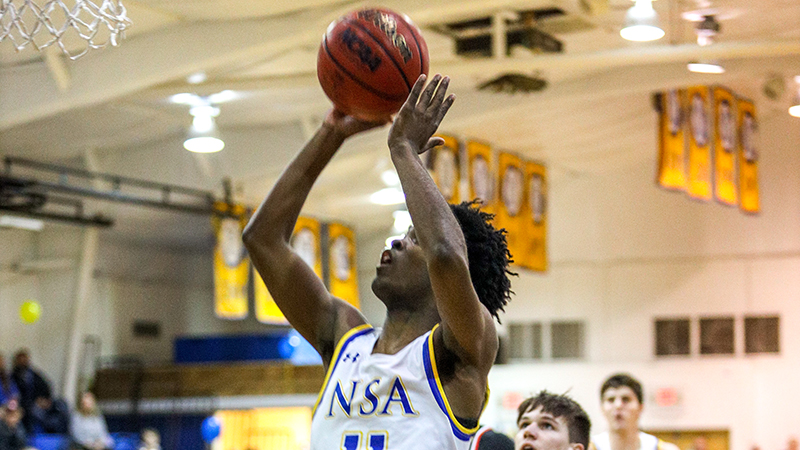 Kaleb Brown was a second team All-State selection for the Saints this season. He was also an All-Conference selection. (Jeffrey Dailey Photo)

The NSA boys’ basketball team had a solid year this season. They finished with a 19-9 record while also earning a state tournament bid. They won their first-round game before losing to Blue Ridge School, which went on to win the state title.

The Virginia Independent Schools Athletic Association released its All-State teams earlier this week, and Saints standout Kaleb Brown was selected to the second team. He was the only selection from NSA.

Brown had a strong season for the Saints, being among the top of the team playmakers throughout the season. Brown was also an All-Conference selection. Brown said he spent a lot of time over the summer working on his playmaking skills and his jump shot. He wanted to be more aggressive offensively, and it ended up working out for him.

Brown is only a freshman, and his future is bright for the Saints. He had multiple games where he scored more than 25 points and continued to make a name for himself in South Hampton Roads. As he continues to get better, NSA should be excited about the future. As a team, NSA only had one senior this year, meaning much of the team should be returning next season.

With Brown being as young as he is he gave credit to his teammates for helping him make plays throughout the season. Earning All-State just encourages him to work harder.

“I was really thinking about it in season,” Brown said. “I was focused on winning games and just getting better. It encourages me to keep working hard though.”

Brown is looking forward to a summer filled with progression, as he can continue to work on his game and be able to come back next season and take that next step with his teammates.

“I want to work on making more contested shots,” Brown said. “I want to be able to make more midrange pull-ups and just continue to be in better shape.”