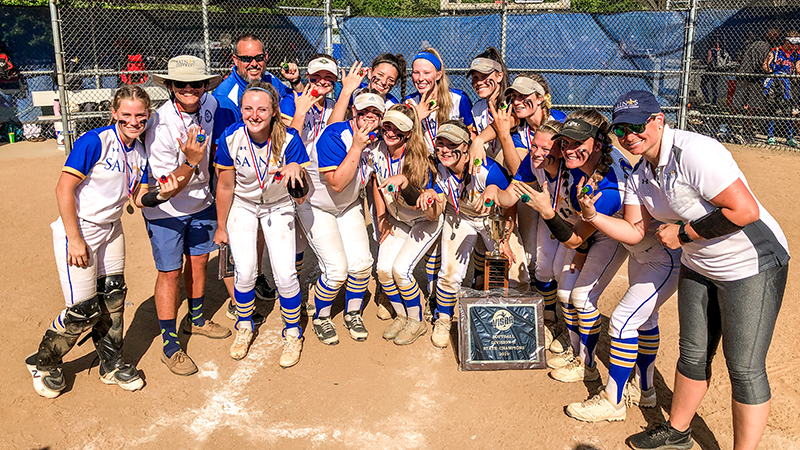 The Nansemond-Suffolk Academy softball team is the reigning state champion from last season.

The Nansemond-Suffolk Academy softball team returns this season after a championship run last year, and they hope to be able to defend their title.

This spring season for the NSA softball team will be a unique one if the season is canceled due to the COVID-19 pandemic. The Lady Saints are coming off of a season where they won the Virginia Independent Schools Athletic Association Division II state championship.

It was a season that was satisfying for so many reasons for the Lady Saints. They had come so close in seasons prior but had fallen short.

NSA returned every single player from its state championship team from last season and would likely have made a strong run to repeat. The team this season has five seniors on it, which will be disappointing for them if they are unable to play their final season. However, Coach Brittany Thornburg knows there are bigger issues at hand to be dealing while the spring season is in limbo.

“We are in a unique position, because our championship team did not include any seniors with the exception of our team manager,” Thornburg said. “It is a very special team with a lot of potential. They are all extremely motivated to return to the game that they love and to compete. There are a number of activities that they can do at home to work on physical and mental preparedness, but it is also very important to have perspective and understand the bigger picture right now. Finding time to balance academics, athletic workouts and assisting their own families will be of the utmost importance to our student-athletes during this unprecedented time. Our highest priority is the health and safety of our NSA families as well as the greater community.”

As they wait to see what will happen, like all spring teams, they are just hoping for a chance to play.