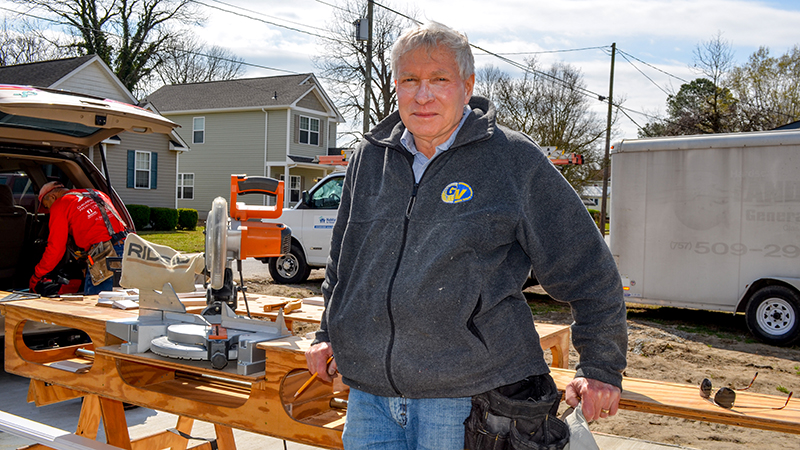 Hugh Story is a Habitat for Humanity of South Hampton Roads board member and “Red Hat” volunteer.

Habitat for Humanity of South Hampton Roads is focused on providing affordable housing for families, and that motivates Hugh Story to keep on building.

Story, 68, is a North Suffolk resident, a board member for Habitat for Humanity of South Hampton Roads, and a volunteer with six years of experience.

The mission of Habitat for Humanity of South Hampton Roads is to build affordable homes that strengthen families and communities, according to shrhabitat.org. The homes are then sold at no profit to partner families, with a 30-year, fixed-rate mortgage that’s no greater than 30 percent of their income at closing.

Story appreciates Habitat’s goal for affordable housing, as well as the camaraderie among his fellow “Red Hats” on job sites. Red Hats are volunteers who have lots of experience with Habitat for Humanity and who can do the necessary work without supervision.

Only up to 10 “Red Hats” are being permitted to work at a time on the Suffolk job site at 219 Pitchkettle Road, as part of the changes that Habitat has made to keep its volunteers safe during the coronavirus pandemic.

Story was on the Suffolk job site March 18, working hard with his team to build the Habitat house for the Jordan family. He said another reason that he enjoys volunteering for Habitat is because he’s always been a woodworker, with lots of house projects under his belt.

“My father was an engineer, and built a number of houses and did a number of house renovations when I was growing up,” Story said at the Suffolk job site March 18. “Just the things we do out here on site are the things that have always interested me. It was a good marrying of skills.”

He also appreciates that the families that move into these Habitat houses have put their own “sweat equity” into them, adding that most Habitat families stay in these homes for long periods of time.

“We’re filling a need, so at the end of the day when you turn over the keys of the houses to a family, it’s a good feeling. You feel like you’re helping somebody who needs it. It’s not a hand out, it’s a hand up,” he said.

For more information on Habitat for Humanity of South Hampton Roads, visit shrhabitat.org.

‘A period of sacrifice’: Governor orders schools closed for…