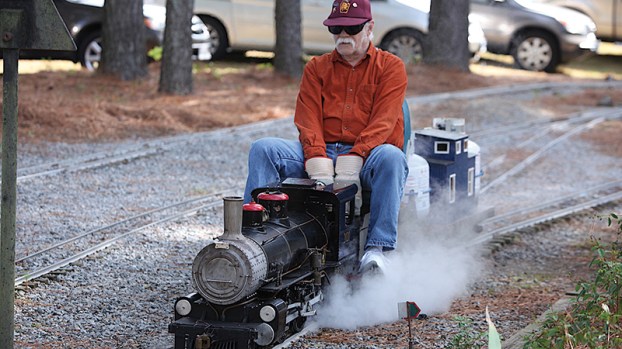 Members of the Bridge Point Farm Southeast Virginia Live Steamers always get a thrill riding their machines around the Chuckatuck-area property of David and Dee Architzel.

A steam whistle wailing in the morning quiet of rural Chuckatuck draws dozens of train buffs to a railroad siding close by the Nansemond River waterfront.

The rail line there may be short — perhaps a 15 minute ride — and the trains just big enough to ride at about two feet tall, but size doesn’t diminish the thrill for those who have come from Maryland, Pennsylvania and across Virginia for their day of steam.

The Bridge Point Farm Southeast Virginia Live Steamers, steam engine fans that organized in 1991 to share their love of and expertise with steam engines, were meeting again at the home of David and Dee Architzel. For the steam enthusiasts, the engines and cars that they build and run are part nostalgia and part craftsmanship — in miniature, 7½ gauge and 15 gauge, according to Architzel. Fully operational and true to their original full size design, right down to the number of bolts, the engines are a tribute to the days when steam ruled the rails.
Much like the other rail buffs that had traveled miles for the event, the local Live Steamers are generally old enough to treasure childhood memories of steam locomotives whistling past their towns and farms. The youngsters running along next to the tracks are years away from that era but no less eager for the train to stop so they can hop on for yet another ride.

More than a mile of track runs through Architzel’s acreage, passing a butterfly garden and crossing a trestle over the wooded ravines. On a quieter day, passengers can glimpse a few deer watching from the thickets lining the tracks and apparently unfazed by the steam whistles.

Youngsters learning about steam-powered trains would bring a smile to the face of Arthur “Junie” Lancaster, the Portsmouth native and Suffolk resident who owned one of the largest toy train collections in the area. His dream of a miniature train that children could ride at his train museum in Trainland, in North Suffolk, came true in 1994 with the help of the Live Steamers. A rideable train, about 1/8 the size of an actual steam-powered train, chugged around its own track at Trainland, often with Lancaster aboard. When he passed away in 1996, Trainland’s demise followed soon after. Don Orr invited the Live Steamers to bring the train and track to his 5½-acre property in Chuckatuck, where he christened the miniature rail line, the Grasshopper Short Line Railroad.

That’s where Architzel became acquainted with Orr and steam engines. Architzel, a U.S. Navy aviator, retired in 2012 as a vice admiral and former commanding officer of the USS Theodore Roosevelt. He was intrigued by the large scale model trains, their history and their development. It’s a big change, perhaps, from his role as commander of Naval Air Systems Command in Patuxent River, Md., but Architzel loves owning his own railroad.

Six years ago, when Architzel came to a Live Steamers meet at Orr’s home, he learned that Orr was moving and ready to rip up the tracks in order to make the property more marketable. Architzel asked Cox the price of the property with the rails intact, made an offer and bought the property three months later. Fortunately, Architzel’s wife, Barbara, loved the house and property too.

Once moved in, Architzel built a pole barn, remodeled the work shop and added a swimming pool, a play fort and a zipline for the grandchildren. He also added a second loop of track and a few picnic tables as well as a deck with rattan easy chairs overlooking a branch of the Nansemond. Barbara, nicknamed “B.B.,” cultivated a large butterfly garden and nurtured the huge blueberry bushes that came with the property.

The Live Steamers relish the setting and frequently bring their engines out for a run, as do the visitors who come out of curiosity or a desire to learn more about the hobby.

One 20-ish train fan in particular stood out as a familiar face and as one of the few younger men working with the trains. Brett Hall, a local TV journalist, was born in Baltimore and grew up in the live steam hobby, thanks to his grandmother’s neighbors who were active in the Chesapeake and Allegheny Live Steamers. Hall encouraged several members of that club to come and bring four of their engines to Architzel’s.

Hall, who has been a member of several live steam clubs as he moved with his career, said, “To see the smile on kids’ faces at the sound of the genuine steam whistle is to see myself 20 years ago.”

So what keeps all these people so enamored with steam? Hall had his thoughts on that too — and they seem applicable to the other live steamers there that day.

”It’s my escape. As corny and cliché as it sounds, a steam engine is alive. When you operate even one of those models, you feel it working, and feel it when it’s not working well. It’s a relationship that gets you around the track. If you don’t have the fire hot enough to produce the steam by the time you get to the bottom of the hill, she will never get you up it. But when you work a job that has you covering people’s worst days in life, it’s a beautiful thing … to just have to worry about getting up that hill.”

Memories at the Marina