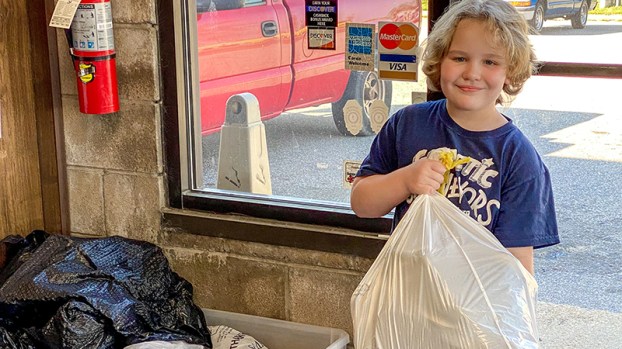 Jett Stone drops off donations for Evelyn’s Wildlife Refuge Shoe Drive Fundraiser to the collection bin that’s located at Tubbs Used Auto Parts in Norfolk. Jett has dropped off several donations, according to an email from Meredith Broadhurst, president of Evelyn’s Wildlife Refuge. Jett’s mother Heather Pack also used to be a wildlife rehabber, according to Broadhurst, and Pack has turned these shoe collections into an activity, “by setting a goal amount for them to collect to help us.” (submitted photo)

Spring is a good time for Suffolk residents to tidy up their homes — especially now, while everyone is staying at home in self-isolation. They can also take their unwanted shoes that they find while spring cleaning and donate them to help the noble cause of wildlife rehabilitators.

“Early spring cleaning can benefit you as well as the wildlife in need,” Meredith Broadhurst, president of Evelyn’s Wildlife Refuge, wrote in an email Monday.

Evelyn’s Wildlife Refuge in Suffolk is asking for any gently worn, used and new shoes to raise money for the pre-exposure rabies vaccinations that wildlife rehabbers need. The Refuge organized this shoe drive through the Funds2Orgs Group, according to Meredith Broadhurst, president of the Refuge.

Any shoes will be accepted as long as they are usable and “don’t have holes and they have soles,” she said, including boots, flip-flops and slippers.

The money that the Refuge raises will go to help pay for vaccinations that typically cost $1,000 each, Broadhurst said. Rehabbers need these vaccinations in order to care for “rabies vector” species like raccoons, foxes, bats, skunks and others such animals.

“Unfortunately, not all insurance companies will cover these vaccinations, which is $1,000 for the three-shot process,” Broadhurst wrote. “When insurance does cover it, (it) usually only covers a percentage, leaving a balance of usually half the cost.”

The minimum requirement for the Evelyn’s Wildlife Refuge Shoe Drive Fundraiser is 2,500 pairs of shoes, which will allow the Refuge to not have to pay shipping costs to send the shoes to the Funds2Orgs Group, and also guarantee that the Refuge receives at least $1,000 towards their cause, she wrote.

The Refuge is attempting to double that goal and collect 5,000 pairs to cover even more pre-rabies vaccinations, she wrote.

“In our area we have a limited number of pre-rabies vaccinated rehabbers because most cannot afford to pay the cost, but the majority of species brought in fall in the rabies vector species category,” she wrote. “This puts a huge workload on the limited vaccinated rehabbers we have in the area. But if we didn’t take on this workload, (then) the animals would be euthanized.

“These animals are natural pest controls and serve a purpose (for) our environment. They deserve that second chance.”

The fundraiser started on March 1 and has been extended to last through May 30. This was because many businesses that had collection bins for the shoe drive are now closed in response to the pandemic.

The current collection sites in Suffolk are at 2756 Lake Cohoon Road, Evelyn’s Wildlife Refuge at 5281 Deer Path Road, and Tidewater Tire Centers at 800 N. Main St. Donors can also arrange for porch pick-ups by calling or texting Broadhurst at 434-3439.

Evelyn’s Wildlife Refuge is a 510c3 nonprofit organization that is licensed to rehabilitate injured, sick or orphaned Virginia wildlife. They’re based in Suffolk but rehab wildlife from across Virginia, Broadhurst wrote, with rehabbers in cities throughout Hampton Roads and the Peninsula.

School Board to meet in person

It’s a regularly scheduled meeting, but it will be anything but normal for the Suffolk School Board when it comes... read more