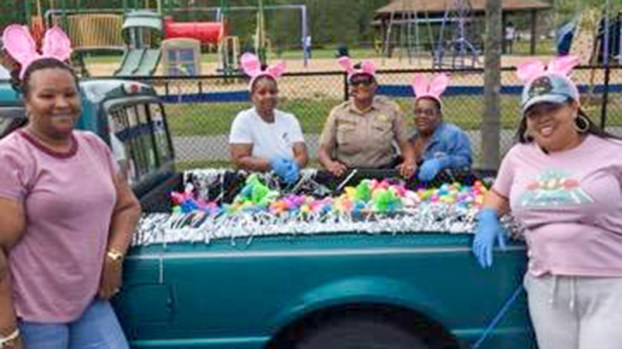 An Easter Egg Parade organized by Suffolk resident LaWanda Thorpe and Sheriff’s Deputy Veronica Woodson — with help from others in their family — delighted families in more than a dozen Suffolk neighborhoods Sunday evening. (submitted photo)

Families in Suffolk got some extra cheer on Sunday when an “Easter Egg Parade” of cars rolled into their neighborhoods.

This Easter Egg Parade was organized by Suffolk resident LaWanda Thorpe and her first cousin Veronica Woodson, a Suffolk sheriff’s deputy. They worked together with their cousins Jameka Staton, Latoya Lassiter and Latonya Steward to help families enjoy their Easter Sundays during the coronavirus pandemic.

“It was just something to do to give back to the community,” Woodson said in a phone interview Monday. “During everything that’s going on with this pandemic, nobody can go out and really enjoy themselves anymore. The playgrounds have been closed to the kids. It was just priceless to see the expressions on their faces as we came up on their neighborhoods.”

Deputy Woodson led the Sunday procession in her Suffolk Sheriff’s Office motor vehicle, with five other cars following behind hers. Each car was decorated for Easter festivities. Woodson and Thorpe’s family members were inside the cars, and also alongside the slow-moving vehicles to give kids colorful plastic Easter eggs filled with candy, plus Easter-themed stuffed animals.

They started driving at 4 p.m. Sunday at Lake Kennedy Park and cruised through more than a dozen Suffolk neighborhoods. Word of the Easter Egg Parade was shared on social media in advance, and families were excited to see the parade ride to cheers and the loud siren of Woodson’s vehicle.

“It was amazing to see. We even had a cousin, Christopher Hearn, (who) dressed up as Mickey Mouse,” Thorpe said. Hearn has the costume through his business Characters for Kids, she said. “He passed out candy with us (and) we thanked him for that.”

By the end of their Easter Egg Parade, they had distributed roughly 5,000 candy-filled Easter eggs to children, and between 25 to 30 stuffed Easter bunnies to infants, Woodson said. The stuffed Easter bunnies were provided by the Easter Bunny Foundation and were left over from the Sheriff’s Office’s visits to Suffolk nursing homes last week.

Thorpe described how excited families were to see their cars come down the road. Parents waved and shouted “thank you” and “good job,” and their children were excited for Easter candy and stuffed bunnies.

There were also some neighborhoods with fields big enough for Thorpe’s family to toss out Easter eggs for the children. Children found these eggs in the grass — a typical, fun Easter activity for them to enjoy during this difficult and unusual time. “It was an awesome experience,” Thorpe said.

There were plenty of warm smiles at Autumn Care of Suffolk Friday morning, as the Easter Bunny greeted residents from... read more