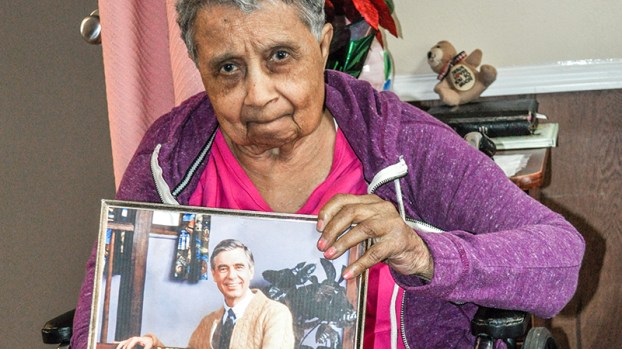 Adelaide Montgomery, a resident of Autumn Care of Suffolk, holds a framed picture of Fred Rogers, her former employer, that hangs in her room at the nursing home. (Jen Jaqua photo)

A ‘beautiful day’ for local woman

Editor’s Note: Our personal visit to Autumn Care took place on Feb. 12, three and a half weeks before the first positive case of COVID-19 in Virginia was confirmed.

Nonagenarian Adelaide Montgomery is a current resident of Autumn Care of Suffolk, and for her, it’s always “a beautiful day in the neighborhood.”

In her younger years, Montgomery was the executive secretary and production office coordinator for Fred Rogers, known to many as the Mister Rogers from his “Mister Rogers’ Neighborhood” program, for many years.

“They were a nice family to work for,” said Montgomery, who was born and raised in Suffolk. “They were very nice people.”

Montgomery, 90, has dementia and can’t recall exactly how many years she worked for Rogers — it was about 10 years, she says — or how she got the job. But her niece by marriage, Rosa Biggs, provided some clues.

Montgomery went to school in Suffolk, Biggs said, and went to Dunbar High School in Washington, D.C., to finish her schooling. She then went on to Duff’s Business College in Pittsburgh.

The show was taped in Pittsburgh, so Biggs surmises that her aunt must have met Rogers or got the job somehow either through the college or by replying to a job ad.

“She loved him,” Biggs said. “She was with him up until he … ended the show. It really hurt her. She was at his funeral and all of that.”

Montgomery said she was at many tapings of the show. She also recalled visiting his home, and he and his family visiting her home.

“I would call him always Mr. Rogers,” she said.

Montgomery said she saw the 2018 documentary on Rogers, and the 2019 movie with Tom Hanks playing Rogers.

“It was OK,” she said of Hanks’ performance. “Every time they put on a new show, I’ll be there to see it.”

She said most people “get very excited” when they find out she used to work for Rogers.

Montgomery said she didn’t have a favorite segment on the show but recalled “The Neighborhood of Make-Believe,” where a cast of puppet characters interact.

Montgomery had a full life outside of her work on the show, too. After the show ended, Montgomery worked for the local AAA branch. Following her move back to Suffolk, Biggs said, Montgomery got involved in Suffolk’s East End Baptist Church, where she led Bible study, played the piano and helped in the office.

Montgomery was married to Fred S. Montgomery, and they lived in West Mifflin when they lived in Pennsylvania. She had five siblings and doted on her nieces and nephews, especially Biggs’ late husband, Maurice, who was the oldest among them.

“It broke her heart when he passed,” Biggs said. “She was very, very devoted to him.”

Montgomery never had children of her own.

Montgomery also used to volunteer visiting people at Autumn Care until she went to live there herself.

Montgomery enjoyed sharing her musical talents with the other residents at Autumn Care when she first moved in, although she doesn’t play much anymore. She used to be able to play the theme song to “Mister Rogers’ Neighborhood.”

It truly is a beautiful day in the neighborhood for Montgomery.

A different Mother’s Day this year

For folks who don’t live in the same home with their elderly parents, the COVID-19 pandemic has been hard. It’s... read more