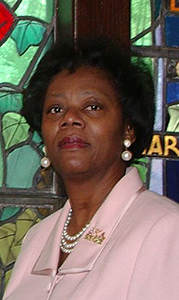 Shirley Ann Brown Jones, 70, of Edgewater Park, New Jersey, formerly of Suffolk, was called home to be with the Lord on Tuesday, March 31, 2020.

Shirley’s early years of service began on her grandparent’s front porch as she tutored relatives, was active at Sixth Street Baptist Church, and joined high school leadership organizations. Her life’s work expanded to touch a vast number of people.

After graduating from John F. Kennedy High School (Class of ’67) she pursued higher learning at Virginia State College (now University), received a Bachelor of Science degree from Temple University (magna cum laude) and a Master of Education from Central Michigan University with honors. In 1970, she married Bruce Jones, her high school sweetheart, and they settled their family in Edgewater Park, N.J. After decades of service, Shirley retired in 2007 as a program manager and contracting supervisor for the Department of Defense in Philadelphia, Pa. Within her own personal walk, home, extended family, church, community, local and international organizations, Shirley continued to be a servant of the Lord and to all mankind. In 2019, Alpha Kappa Alpha Sorority Inc. recognized her for 50 years of membership. Her servitude continued as a member of the LINKS, Inc. and a member of Tabernacle Baptist Church in Burlington, N.J.

The family mourns her death yet continues to celebrate her life and living. Shirley’s “dash” was not in vain.

A memorial service will be held at a later date due to the COVID-19 restrictions.

T.E. Cooke-Overton Funeral Home Inc. regrets to announce the death of Mr. Carlton Mann. Funeral arrangements will be announced at a... read more