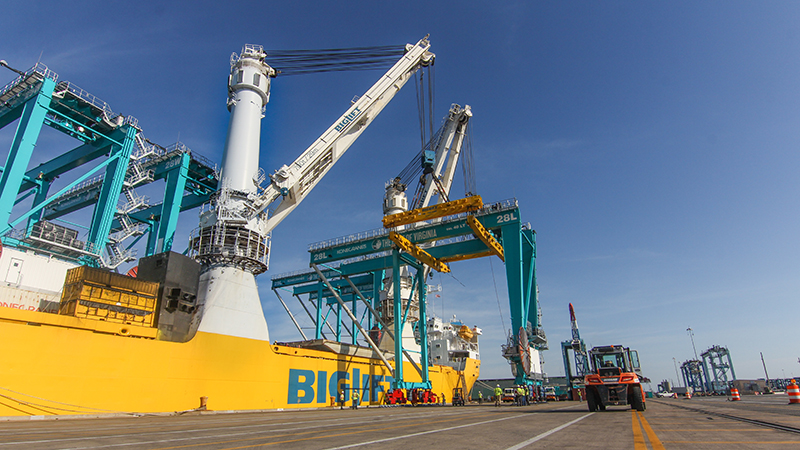 The final group of automated stacking cranes arrived May 14 at Norfolk International Terminals, marking another milestone in a multi-year expansion project. (submitted photo)

The final group of automated stacking cranes arrived May 14 at Norfolk International Terminals, successfully ending more than two years of constant deliveries of the machines that are the centerpieces of the expansion at The Port of Virginia’s two primary container terminals.

“We continue to mark milestones in the expansion of The Port of Virginia, and this one signals that we are very close to completion of the work we started three years ago,” said John F. Reinhart, chief executive officer and executive director of the Virginia Port Authority. “We have modernized our cargo handling capabilities at Norfolk International Terminals and Virginia International Gateway, and significantly increased our operational efficiency, and these cranes are a big part of the reason.”

“The ability to receive the cranes at the terminals, do the final assembly and installation and then put them to work as soon as they were ready has been integral to the success of our overall expansion projects,” Reinhart said. “It allowed us to begin to move our customers’ cargo safer, swifter and more sustainably while demonstrating to the industry that we were bringing on the new capacity as soon as it was available. It is important to recognize Kone for working with us in developing the delivery schedule, and its dedication to ensuring that these cranes arrived on time and on budget.”

The port’s terminal capacity expansion project will be compete this fall, following the final phase of construction at NIT South and the arrival at Norfolk International Terminals of two new ship-to-shore cranes. With all of the cranes in place and operational, the port will have the capacity to process an additional 1 million containers annually. The combined cost of the projects is nearly $800 million.

While Konecranes provided the cranes, it partnered with Roanoke, Virginia-based TMEIC, which provided the automation technology that drives the units. Konecranes and TMEIC have had a long partnership that dates back to the construction of Virginia International Gateway and implementation of automated stacking cranes there.

“The maritime industry is facing unprecedented challenges, but there will be a recovery,” Reinhart said. “The Port of Virginia has the assets, equipment and capacity to be competitive and efficient while working with its customers and cargo owners to meet their needs.”